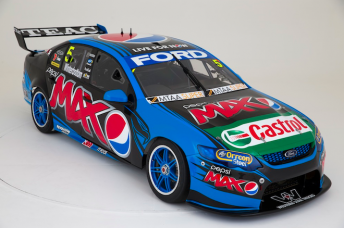 Ford Performance Racing has released the first images of the Pepsi Max Falcons that Mark Winterbottom and Chaz Mostert will campaign this season.

The livery is an evolution of that seen during the balance of the team’s inaugural season with the drinks brand in 2013.

A long-time FPR project, Mostert replaces Will Davison, who has moved to Erebus Motorsport.

“I am pretty relaxed to be where I am now and have worked all my life to get to a factory drive,” said Mostert ahead of Saturday’s pre-season test at Sydney Motorsport Park.

“It will be great to get out on track, drive beside Frosty and learn as much as I can.

“I have huge shoes to fill as car six has had some awesome drivers over the years.

“My name isn’t quite as famous as the guys that have gone before me but I am keen to continue the tradition of the success of every driver related to the FPR #6.”

Team-mate Winterbottom continues to strive for his and the team’s first championship victory.

The 32-year-old won Bathurst last year before being pipped by Davison to third in the final series standings.

Having previously been criticised for driving too conservatively at key moments, Winterbottom says that this year will be about finding the right balance.

“To win the championship you have to be aggressive, but also know when to be conservative, so success this year will be a matter of picking the right moment for each,” Winterbottom said.

“While we missed out on the title last year my rivals now know if there is a gap, I will have a crack.

“I added aggression to my driving style, I set a standard and their opinion has changed which is a good thing.”

See below for more images of the Pepsi Max Fords

The 2014 Castrol-backed FPR challenger to the V8 Supercars Championship