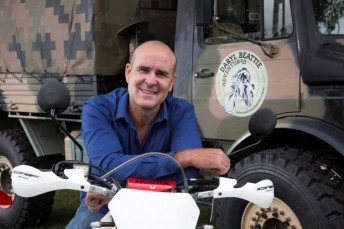 Beattie, a winner of three 500cc grands prix and runner-up to fellow Queenslander Mick Doohan in the 1995 world championship, has formed the motorcycle tour business that will venture into the Aussie outback.

Daryl Beattie Adventures will launch with seven tours in its maiden year of operation in 2014.

The first tour involves a six day/five night Birdsville to Alice Springs ride highlighted by a crossing of the Simpson Desert starting on March 27.

Among other adventures planned are three Cape York rides starting from Cairns and a second Birdsville to Alice tour will shadow the famous Finke Desert race.

“I have spent many years in the outback. This is a personal passion and something I want to share with others,” Beattie, who was born in Charleville, said.

“I’ve spent a lot of time travelling to spectacular and remote parts of Australia.”

Another longer haul includes an Uluru to Broome ride that includes the Canning Stock route to Halls Creek run through to the Indian Ocean.

Beattie will lead each tour of paying customers.

For more details of the tours, dates, prices, inclusions and bookings, go to www.darylbeattieadventures.com.au