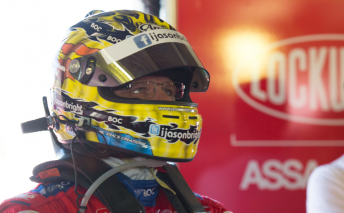 Jason Bright has called for the introduction of NASCAR-style barriers across the top of Mount Panorama following his heavy crash at last week’s Bathurst 12 Hour.

The V8 Supercars star lost the rear-end of the #5 Melbourne Performance Centre Audi R8 during qualifying last Saturday, running out of opposite lock and spinning into the right-side concrete wall at Reid Park.

Knocked out in the crash, Bright spent the afternoon in hospital at nearby Orange before being released that evening.

The Audi was ruled out of the weekend due to the damage; one of four GT cars not to make the start following heavy crashes.

The former Bathurst 1000 winner wants to see NASCAR’s Steel and Foam Energy Reduction barriers installed in front of the concrete walls at Bathurst in order to stop such heavy impacts.

The barriers, which feature a combination of polystyrene foam and steel tubing, were developed with input from both NASCAR and IndyCar more than a decade ago and are now widespread across top level oval and road courses in the United States.

“I think it shows that there are a few sections across the top of the Mountain that need protection on them,” Bright told Speedcafe.com of his accident.

“There’s a product out there now that works very well in NASCAR that would suit what we’ve got there. 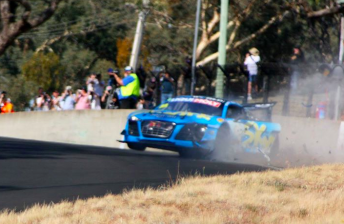 “I could pick three or four 50 metre sections of race track across the top of the Mountain where it would protect you from those really big, nasty whacks.

“Where Murph (Greg Murphy) and (Chaz) Mostert went in on the outside (last year), where I went in, where Will (Davison) went in a couple of years ago (2010, at the bottom of Reid Park) and down the bottom of the hill after Skyline…

“If you put the barriers on in those couple of areas it’s going to stop the really big hits that we see across the top, without flinging cars back into the middle of the road like a tyre barrier would.”

Bright added that the only other time he’d felt like he was going to black out after a crash was after hitting the Reid Park wall late in the 2007 Bathurst 1000.

“I was dazed all the way to the sand trap on that occasion feeling as though I was going to black out,” he said.

Bright says he has recovered well from the latest hit but will need a final doctor’s clearance before stepping back behind the wheel of a racing car this weekend at Sydney Motorsport Park’s pre-season V8 Supercars test.

“To be honest my ankle was a bit sore the next day but that came good and my shoulders are a bit sore from the HANS but that’s getting better by the day,” he said.

“I have to have clearance from the doctor before Saturday, but it’s pretty much just a process that has to be completed.”

Stressing the importance of the test due to the reduced allocation for 2014, Bright says that he’s confident of again coming out of the blocks strongly before mounting a championship challenge.

“I feel like I’m going into it with a better chance than any other year,” he said of fighting for the title.

“Last year in the first part we were more competitive than we had been in a long time, but we had a disastrous Adelaide that really set us back.

“This year we’re going in with a car that I know can run in the top five or six all year and can get poles and win races.

“We just need to focus on being more consistent and score points on the days we can’t win.

“Last year being behind from Adelaide we then took more risks in certain places than we would have liked, which didn’t always work for us.”