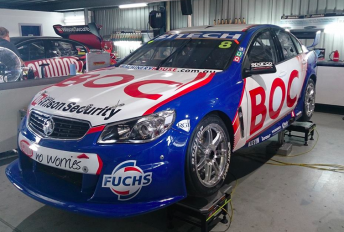 The team has formally announced the continuation of the pairings ahead of this weekend’s pre-season test at Sydney Motorsport Park.

The Coulthard/Youlden and Bright/Jones combinations finished ninth and 17th respectively in last year’s inaugural Cup after a mixed run through the Sandown, Bathurst and Gold Coast events.

BJR has also confirmed that Andrew, the nephew of team owner Brad, will again run a full Dunlop Series schedule with the team.

Youlden does not race full-time but competed as recently as last weekend’s Bathurst 12 Hour, where he led the factory Abarth Fiat 500 campaign.

“Luke has plenty of raw speed and that was highlighted with the podium at the Gold Coast and Andrew’s run at Bathurst was one of the best I’ve seen him do,” said Brad Jones of last year’s races.

“He (Jones) had a tough run at the Gold Coast (where he crashed heavily in practice) but he really is driving as good as he’s ever driven.

“I’m hoping for some really strong results this season.”

The confirmations leave just one seat remaining in BJR’s endurance roster alongside Dale Wood in the #21 ADVAM Holden.