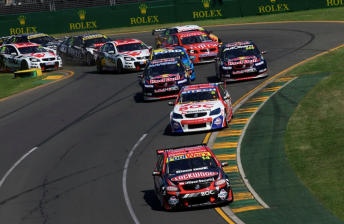 V8 Supercars will contend with rolling starts in all four non-championship races at the Rolex Australian Grand Prix in Melbourne from March 13-15.

The move comes despite a backlash from many drivers and teams after rolling starts were implemented for the start of the second part of the 60/60 events last year.

Confirmation of the format changes at the grand prix meeting come despite a decision by V8 Supercars this time last year to backdown on an intended move for double-file restarts to occur at the opening Clipsal 500.

In other format changes confirmed for Albert Park, a rolling points system will determine the starting order for each heat while the final race will carry double points.

“This unique format for the Rolex Australian Grand Prix is something fans have never seen before,” V8 Supercars chief executive James Warburton said.

“Double-file rolling starts and resumptions after safety cars and, double points in the final race really will raise the stakes.”