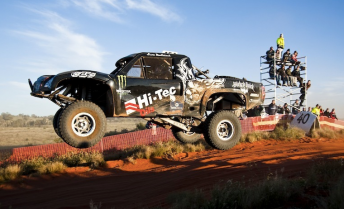 The Australian Off Road Championship has signed a deal where the five-round series will have a dedicated 30-minute program on 7mate.

An additional hour-long highlights special will also be broadcast under the newly signed arrangements which also include a return to Speed TV Australia and international coverage on EDGEsport in Asia.

While the programs will be shown and replayed first on 7mate – or affiliated stations Prime 7 and South Cross Television in remote regions – all will again receive significant national coverage on Speed TV Australia, and internationally in Asia via EDGEsport through an ongoing partnership with distributor IMG Media.

HP Sports Management and its team will again drive the television production, with HPSM’s Bron Humphrey saying that plans were already in place to promote the AORC even further in 2014.

“We’re thrilled to continue our partnership with the Seven Network, Speed, Mark Beretta, and all of our broadcast partners,” Humphrey said.

“The exposure generated last year created a real excitement for the category and we’re looking forward to creating new ways of promoting it and expanding to a few new markets as well.”

The 2014 calendar sees five events being held in five states, including the newly-created season opener at Kalgoorlie (Western Australian).