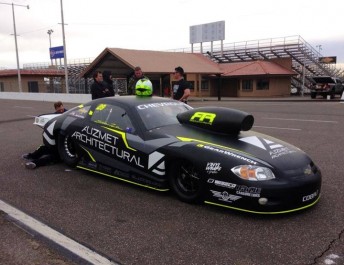 The Chevrolet Cobalt piloted to the NHRA field by Shane Tucker. Pic: RTR)

The two Australian rookies in the NHRA Mello Yello Drag Racing Championship – Shane Tucker (Pro Stock) and Richie Crampton (Top Fuel) have impressed at the opening round of the season, the Circle K Winternationals at Pomona in California.

Queenslander Tucker created history by becoming the first Australian to have qualified for an NHRA Pro Stock field.

He snuck into 16th position of the 17 entered cars.

Meanwhile, Crampton, who has been granted a seat at Morgan Lucas Racing, qualified ninth.

After tyre shake in the first qualifier, Tucker’s father Rob ordered the car that they have leased from Victor Cagnazzi to be shut down on the startline ahead of qualifying two.

A rare fire in a Pro Stock car was evident towards the rear end.

Upon further investigation, the genesis of the fire was from the main power cable connecting to the battery.

Sneaking into the field late in the event saw Tucker have a tough first assignment, against quick time man, Vincent Nobile.

He took the Pro Stock leading light right to the wire in his first ever NHRA matchup.

Nobile crossed the line with a 6.524s pass against Tucker’s 6.594. Although eliminated, Tucker was gallant.

Nobile got through to the semis where he was eliminated by V Gaines. Gaines came up against Jason Line in the final, with Line taking the win. 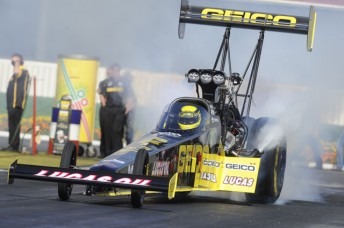 Adelaide’s Richie Crampton gasses it up at Pomona

Crampton got off to a great start in an extremely tough NHRA debut, coming up against last year’s Rookie of the Year, Brittany Force in the Castrol EDGE rail.

The South Aussie flew down the track in 3.747s against Force to take the Geico dragster to round two.

There he had a challenging assignment to face top qualifier and new track record holder, Doug Kalitta. Kalitta eliminated Crampton, however the Aussie rookie acquitted himself well – showing consistency with a 3.764s pass to Kalitta’s marginally better 3.729.

The other full time Australian in Top Fuel, Dave Grubnic had a messy path through to a second round defeat. He battled through round one against Bob Vandergriff, before Spencer Massey accounted for him in a troubled 9s pass.

Kalitta made it all the way through to the final by getting around Massey, where he was defeated by Al Anabi Racing’s Khalid al Balooshi. Earlier, Kalitta got through the first round where his opponent, Brazilian Sidnei Frigo had a scary ride with a blown right rear tyre bringing him to a halt. 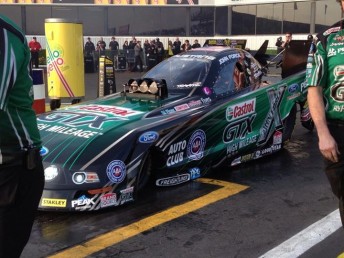 In Funny Car, the evergreen John Force started his last year with Castrol GTX and Ford in the best fashion possible, the 2013 Champion taking his 139th career victory.

Recent Australian visitor, Ron Capps got himself through to round number two, which in itself was a miracle. Capps survived a wild ride during qualifying which saw the engine explode spearing a confetti of fiberglass around the Pomona facility.

The NHRA Mello Yello Drag Racing Series is back in action in two weeks time at Phoenix, Arizona.