Home » Features » Pirtek Poll » POLL: Who will start favourite for the Clipsal 500?

POLL: Who will start favourite for the Clipsal 500? 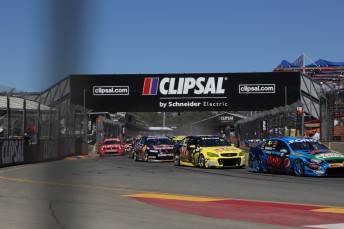 Who will start favourite in the 2014 edition of the Clipsal 500?

With the official pre-season test to showcase the new-look V8 Supercars field on Saturday, the pundits are sharpening their pencils for which driver will start favourite at the season-opening Clipsal 500.

The test at Sydney Motorsport Park offers a glimpse into which teams could hit the ground running at the Clipsal 500 on the Adelaide street track from February 27-March 2.

Jamie Whincup used Clipsal back in 2006 to start his remarkable run of form, the start of his four meeting wins at the 3.22km course.

The record-equalling five-times series champion is an obvious pick to be one of the favourites however the race has been responsible for some mixed results in recent times.

As one of V8 Supercars’ showpiece events, the Clipsal 500 has also undergone a bit of surgery this year with organisers tampering with tradition for the first time since the maiden event in South Australia’s capital in 1999.

The Saturday race will be split into two 125km legs, the latter finishing in the twilight hours with the Sunday race remaining a traditional 78-lap or 250km leg.

Last year Whincup’s team-mate Craig Lowndes exploded out of the box to win the Saturday race while the Sunday leg threw up a shock winner in Shane van Gisbergen taking the spoils for Tekno.

With a different format this year, will the balance of power shift again?

Have your say on who you think is favourite to win the Clipsal weekend.