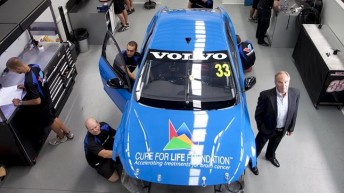 A peak at the Volvo hinting at a unique sponsorship program. Pic: Australian Financial Review

Launch details for the highly anticipated Volvo Polestar Racing squad will see the covers lifted off the Swedish attack on Thursday morning.

The #33 of incumbent Garry Rogers Motorsport driver Scott McLaughlin and #34 of incoming Swede Robert Dahlgren will see Valvoline back as naming rights sponsor.

However the team is still looking for other backers with Rogers suggesting in a story in the Australian Financial Review that his plan includes a program where a certain percentage of a sponsor’s package would see money donated to a charity.

Preparations for the S60’s arrival have included straightline aero testing that has involved aero homologation and the B8444S engine having a brief track test at Phillip Island.

Later in the evening Ford Performance Racing will stage its reveal at Sydney Motorsport Park while Red Bull Racing Australia will hold its launch at a similar time.

The Red Bull unveiling at a boutique venue at Alexandria will see both the Holden and Ford squads fighting for their share of coverage at conflicting timeslots.

Meanwhile the SP Tools-backed Holden Racing Team will rip the covers off its Commodores at 8am on Wednesday.

The launches will be a prelude to the official pre-season test at Sydney Motorsport Park on Saturday.