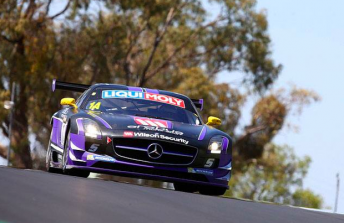 The failure that cost Erebus Motorsport’s lead entry its chance of winning the 2014 Bathurst 12 Hour will be investigated by Mercedes-AMG’s motorsport arm in Germany.

The #1 Mercedes of Bernd Schneider/Maro Engel/Nico Bastian scored pole position and led the majority of the first eight hours of the race before a failure on the right-rear of the SLS saw it garage bound.

Two HWA engineers were at Bathurst assisting the Erebus and HTP Mercedes teams, and will likely bring components back with them to Germany.

“It had a rear hub issue, for some reason the drive pegs came loose inside the wheel, which meant the wheel came loose and had a vibration,” Erebus team manager Barry Ryan told Speedcafe.com after the race.

“We don’t know exactly how it happened or why it happened yet but it just developed a vibration and then found a problem with the hub.

“HWA will investigate what happened. They’ve already started looking into what went wrong and they’re incredibly thorough with this sort of thing. It’ll be fixed pretty quick.” 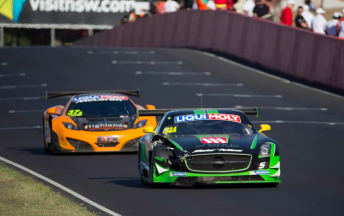 Although unable to rule it out, Ryan does not believe that a high-speed trip through the McPhillamy Park gravel for Nico Bastian during the race played a part in the problem.

“I don’t think so,” he said of whether it could have been a factor. “He did hit something when he went through there that tore part of the rear bumper off, but there was no damage on the rim. We’ll have to see.

“It (the problem) was just such a shame because we were strong and just driving to a lap time to ensure we could get to the end without putting a set of brake pads on it.

“We were in a very good position to fight anyone at the end if we had to.”

Erebus managed to escape with a third place finish through its Will Davison/Jack Le Brocq/Greg Crick driven second entry despite the #63 SLS suffering significant damage during the race.

The car clipped a kangaroo in the opening minutes with Le Brocq at the wheel in an incident that took the #23 JBS Lamobrghini out of the race completely.

Estimating that it would drop two laps changing the front splitter even under Safety Car, the team elected to continually make minor repairs during the day as the drivers adjusted to the ill-effects of the damage.

Although a mid-race hit from Crick on the #65 Daytona at The Dipper furthered mangled the front-end, Davison was able to lap in the 2:05s in the run to the flag as he held out Shane van Gisbergen in the charging McLaren.

“To hit that kangaroo and do all that damage on the front, we thought we’d just be limping home from there,” said Ryan of the second car.

“But at every pitstop we tried to fix it a little bit and then Cricky had a slight hit with someone but we kept pressing on and it hung in there.

“The drivers just found a way around it in a different style. They worked with each other and taught each other to get around the problems.

“It was still pretty fast at the end even though it had really bad understeer. All three drivers did a tremendous job in that car.”

Erebus has already confirmed that reigning Porsche GT3 Cup Challenge winner Richard Muscat will step into one of its SLSs for an assault on this year’s Australian GT Championship.

A decision on whether to run the second car in the AGTC or save it for international events, potentially including the Spa 24 Hours or Macau GT Cup, is due to be made within the next fortnight.

Next Story Tiny Fiats to return for 2015 Bathurst 12 Hour