Speed but no trophy for Quinn McLaren

Speed but no trophy for Quinn McLaren 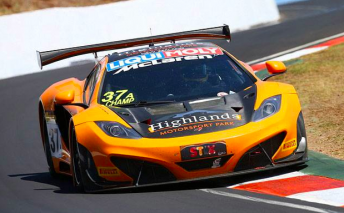 Tony Quinn declared his driver Shane van Gisbergen the star of the Bathurst 12 Hour after a race that saw the team’s McLaren fall short of a podium finish.

The gruelling Bathurst event marked the debut appearance for the MP412C GT3 on Australian soil, with Quinn flying in the car’s developer, Scotsman Andrew Kirkaldy, for the occasion.

Shared by Tony Quinn, son Klark Quinn, Kirkaldy and Van Gisbergen, the car ran on the lead lap all day on the way to a fourth placed finish.

Van Gisbergen starred during his first spell in the car, hunting down and passing Erebus’ Bernd Schneider for the lead as he cut a bold path through the traffic.

Strong supporting stints from Klark Quinn and Kirkaldy kept the McLaren in the hunt, but higher fuel consumption and the team’s driver change strategy ultimately played against it.

A decision for Tony to complete what would prove his one and only stint of the day during the race’s ninth hour saw the car owner up against Craig Lowndes in the Maranello Ferrari and Will Davison in the #63 Erebus Mercedes.

The subsequent loss of time triggered a decision to return Van Gisbergen to the car early, which later meant the Kiwi could only complete a relatively brief stint at the end without breaking the maximum driving time allowance.

“We were running out of time for the other guys and they were just knackered to be honest. 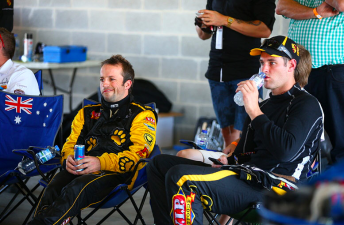 “So they (the team) pushed me in, but to be quite honest I think it was the right thing to do.

“I was listed to drive the car so I should have had a drive.”

Despite missing the podium, Quinn underlined his pride in the team’s effort.

“I’m really proud of the team and especially Klark because he’d not driven the car before,” he said.

“It was a very, very close finish and the guys that finished on the podium did a bloody great job.

“Giz was clearly the star act but each team had their issues and, as is always the case, you just had to be in a position to be there in the last two hours.

“We probably spent too much energy before the last two hours.

“In hindsight you can say this or that but who knows how it will pan out?”

Van Gisbergen was also left to reflect on a long day after coming up short in a close finish.

“To be fourth and three seconds off the win is tough but we pushed hard all day and did our best,” he told Speedcafe.com.

“They put me in with three stints to go (directly after Tony’s time in the car) just to get track position back but in the end we got a Safety Car anyway and you can’t predict that stuff.

“If I’d double stinted to the end it would have been tough because it was so hot but it may have been the best way to go speed wise.”

Van Gisbergen faught to take third from Will Davison’s wounded #63 Erebus entry in the closing laps, but couldn’t find a way around thanks to the superior straightline speed of the Mercedes.

Having started his year by competing in the Daytona 24 Hour and Bathurst 12 Hour, Van Gisbergen added that his full focus is now on his Tekno Autosports drive in the V8 Supercars Championship.

“It’s just good fun and good miles, but V8s is what I live for, it’s the best racing,” he said of packing more GT events into his schedule.

“It’s cool to race here in a McLaren and in America with the Porsche so I’ll do GT races when I can get drives but the focus is certainly on the V8s.”