Six from six as Greg Murphy maintains the rage

Six from six as Greg Murphy maintains the rage 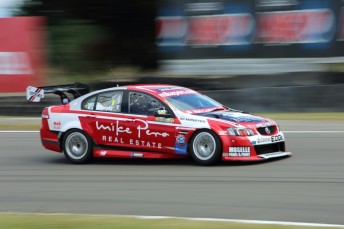 Greg Murphy completed a clean sweep of the second round of the BNT V8 SuperTourers Championship at Manfeild.

Murphy has now bagged all six races in the 2014 title hunt as the touring car legend commences a charge for a second straight title in the Mike Pero Mortgages Holden.

While Murphy remains unbeaten, Simon Evans pushed hard and established himself as the new star of the series.

Aucklander Evans missed the overall round victory at The Sound 250 meeting by just one point – Murphy won the races but fellow Holden driver Evans scored extra points for his qualifying performance and for taking fastest lap in all three races.

“He just pushed and pushed, he didn’t give up.

“It’s not easy – I was pushing eleven-tenths all the way. If I relaxed a bit he was right on me again.”

His father Owen was a top Porsche racer and land-speed record setter, and younger brother Mitch is expected to contest a second season of GP2 this year.

“I think we’ve definitely made a breakthrough,” Evans said. “We’ve been chipping away.

“This race we probably had the fastest car – we set a new lap record and got the fastest lap.”

He led race one yesterday before his car slowed slightly with an electrical malfunction, which he admitted had been frustrating.

Evans has now also developed the ability to help the team fine-tune the car to get the most out of it,

“In the first practice we were only ninth fastest and now we’ve got the fastest car – that’s very rewarding,” he said.

Hamilton’s Ant Pedersen, a close second to Murphy in the 2013 championship, qualified on pole for race one yesterday but spun coming out of the first corner.

Today he raced his Ford to second in the first race, ahead of Evans, and came third in the finale.

Andre Heimgartner was third overall for the round, just ahead of Richard Moore.

The next round of the BNT V8 SuperTourer championship, running within the Hankook Super Series, will be staged at Pukekohe on the weekend of March 22-23.

Meanwhile Australian Jason Bargwanna seized the lead in the NZV8 Touring Cars, winning all three races in his Toyota Camry while previous leader Nick Ross from Cambridge failed to finish the morning race because of an electrical fault on his Holden Commodore.

Bargwanna’s victory in the final race earned him the Jason Richards Memorial Trophy for the second time.

In the V8s’ TL category for the older cars Barry Holden – racing again after a gap of several years – won both of today’s races.

Holden said he used to be a Holden fan because of his name but switched to Ford because that was the most suitable car available.

“I thought about that for a week before we bought the car,” he said.