Lowndes holds on in Bathurst thriller

Lowndes holds on in Bathurst thriller 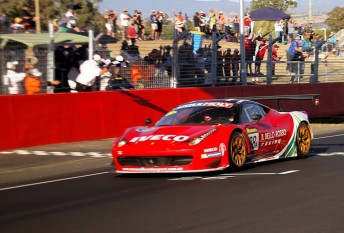 Lowndes takes the flag for Maranello

Craig Lowndes led Maranello Motorsport to a stunning victory in the Bathurst 12 Hour by holding off the HTP Mercedes of Max Buhk in a thrilling finish.

The five-time Bathurst 1000 winner had to survive a Safety Car restart with 13 minutes to go that saw a 15 second lead evaporate.

The superior straightline speed and braking power of the Mercedes threatened to upset the local crowd, with Buhk ranging up along the outside of the Ferrari as just five minutes remained.

Although the gap fluctuated through traffic, Lowndes hung on to win by just 0.4s.

Will Davison and Shane van Gisbergen were third and fourth in the #63 Erebus Mercedes and Quinn McLaren respectively; the top four separated by just three seconds at the finish.

The Maranello Ferrari, HTP Mercedes and #63 Erebus Mercedes had all been off the lead lap during the middle portion of the race.

The Ferrari was stung first for pitlane speeding and later for not having its pitboard in the garage when a stop was completed, but used well-timed Safety Cars to regain ground.

Salo lost track position to the HTP Mercedes in his final stint having found himself stuck behind an impressive Greg Crick in the #63 Mercedes.

The flying Buhk was able scythe past the pair but then lost the ascendancy with a long final pitstop, which included a front brake pad change.

Thomas Jaeger had driven the HTP entry from 11th on the grid to second during the opening hours before an early touch with Rick Kelly’s Nissan eventually led to a front-right wheel nut failure.

The German team subsequently lost two laps as it went to the garage for repairs, but clawed its way back onto the lead lap with two hours remaining through speed and strategy.

The first eight hours of the race had been dominated by the #1 Erebus Mercedes of Bernd Schneider/Maro Engel/Nico Bastian.

The all German crew led the majority of the contest from pole but fell foul of a failure in the right-rear hub at the end of the eighth hour.

Schneider’s early stints in the fourth and fifth hours had included a memorable dice with the Van Gisbergen-driven McLaren that featured several hairy moments for the Kiwi.

The McLaren was a front-runner all day but lost out largely due to pit strategy, which included putting car owner Tony Quinn in for a single stint relatively late in the going.

The first half of the race had been punctuated by three incidents; the first of which saw a kangaroo take the #23 JBS Lamobrghini out of the race after just 15 minutes.

The Nismo Nissan and Clearwater Ferrari crashed heavily at McPhillamy in the third hour, while the fourth hour saw M Motorsport’s race end in spectacular fashion at the same corner.

CLICK HERE for more on the early incidents in Speedcafe.com’s halfway report

The Class B honours fell to the Grove Porsche of Ben Barker/Earl Bamber/Steven Grove after a day-long battle with the similar Competition Motorsports entry.