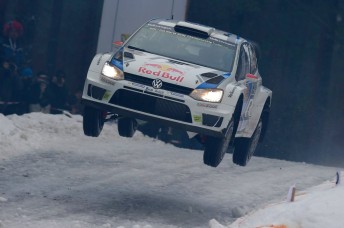 Third win in Sweden for Latvala

Jari-Matti Latvala has won his third Rally Sweden title after keeping things fast and clean on the snow and ice.

The Finn now heads the WRC standings after round two of 13.

The Volkswagen driver took the lead yesterday in his Polo R but could only relax when fellow VW driver Andreas Mikkelsen dropped time after sliding into a snowbank in the morning stages of the final leg.

Third was Mads Ostberg in a Citroen DS3, a further 5.9sec behind. Ostberg claimed three bonus points by setting the fastest time through the final Power Stage. Latvala took two points and Mikko Hirvonen one.

Hirvonen finished fourth overall with Ott Tanak turning plenty of heads to take fifth after more than a year away from the championship.

World Champion Sebastien Ogier recovered from an off on Leg 2, which dropped him back to 20th, to finish sixth, overhauling Henning Solberg in the penultimate stage.

Kris Meeke found the snow today and dropped from sixth back to 10th. Elfyn Evans was on course for ninth until crashing his Fiesta RS in the final stage, while Martin Prokop retired this morning when he went off and became stuck in the snow.

Hyundai duo Juho Hanninen and Thierry Neuville finished down the order after respectively damaging a wheel and breaking the front right suspension on their i20 cars yesterday and Robert Kubica was 24th after three lengthy spells in the snow.

Round three is Rally Mexico which is based in Leon on 6 – 9 March.