HTP ‘lucky’ with second after setbacks

HTP ‘lucky’ with second after setbacks 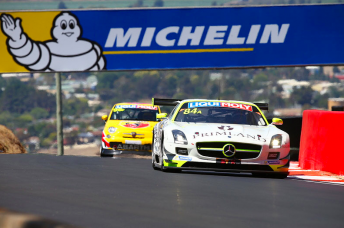 The HTP Mercedes took second after a fraught weekend

Factory Mercedes driver Thomas Jaeger admitted that HTP Motorsport was lucky to escape a fraught weekend at the Bathurst 12 Hour with a second place finish.

The effort nearly came to naught on Friday afternoon when Harold Primat crashed the #84 SLS heavily into the unforgiving concrete wall at Sulman Park.

The team worked through the night to have the car ready for qualifying on Saturday, where it could manage just 11th fastest.

Jaeger subsequently charged to second by the Lap 30 mark but an incident along the way, this time relatively minor side-to-side contact with the Nismo Nissan, soon derailed its campaign.

A loose gullwing door, which had to be closed by a trackside marshall under Safety Car at Griffins Bend, further added to the drama before the fightback began.

Using the full course colours and the inherent speed of the SLS package, Buhk eventually clawed his way into the lead ahead of the last round of pitstops. 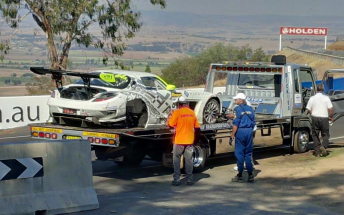 The HTP Mercedes being recovered on Friday

A long final stop, which included a brake pad change, then saw Bulk lose the advantage to the Craig Lowndes-driven Maranello Ferrari.

Despite ultimately finishing second to Lowndes by just 0.4s in what appeared to be a faster car, the team was all smiles at the end of the race.

“I was not happy when the SC deployed, I thought it would be a Sunday afternoon drive to the end,” said Buhk of the yellow that set up a finish that saw the top four cars all cross the line within three seconds.

“I saw Craig in front of me, then I was really focused to have some good laps to chase him, it was working quite well. Overall I am very pleased with the weekend.”

Jaeger, who won the race on debut in 2013 with Erebus Motorsport, paid tribute to the team’s efforts in the garage.

“I had the moment where I touched the Nissan, thank god the car wasn’t too damaged and we got back on track and did some good stints,” he said.

“All these problems we had on Friday and Saturday, we are more than lucky to be on the podium. The team did an amazing job.”