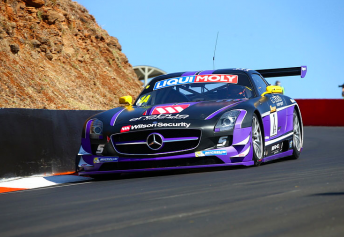 The #1 Erebus Mercedes leads the way

Mercedes and McLaren have dominated the front-running in a dramatic first half of the 2014 Bathurst 12 Hour.

The #1 Erebus Mercedes SLS of Nico Bastian/Bernd Schneider/Maro Engel led away from pole and has shown the way for the majority of the first six hours.

A trip through the gravel for Bastian at the top of the Mountain moments after the unseeded driver returned to the car in Hour 6 has proven the only major scare for the reigning winning car to date.

With its Pirelli tyres revelling in the hot conditions, the Klark Quinn/Shane van Gisbergen/Andrew Kirkaldy/Tony Quinn McLaren has kept the German trio honest.

Van Gisbergen starred in the fourth and fifth hours, surviving a series of high-risk moves as he chased, and eventually overtook, Schneider for the lead.

A Safety Car while pitstops were unfolding at the end of the sixth hour ensured the #88 Maranello Ferrari sits third and on the lead lap.

The car had dropped from the front-running thanks to a drive-through penalty for pitlane speeding as gentleman driver Peter Edwards stepped in for his stint.

The #3 Phoenix Audi, which lost time with a puncture in Hour 3, #63 Erebus Mercedes, #9 Melbourne Performance Centre Audi and #25 United Autosports Audi fill fourth through seventh, all one lap adrift.

It took just 15 minutes for the race’s first major incident, which saw the #63 Erebus Mercedes and #23 JBS Lamborghini make contact with a kangaroo at Griffins Bend.

The Jack Le Brocq-driven Mercedes dropped off the lead lap while the crew fixed damage to its right-front corner; a deficit later regained through the pitstop and Safety Car cycles.

The JBS Lamborghini was meanwhile out on the spot, leaving driver Peter Kox to lament both the wildlife and the presence of a roll of tape that had been left in the car on the grid.

“I was quite close to the Mercedes and the tape flew through the pedals and I was affected,” he said

“In the end if I had been closer to the Mercedes (not losing time due to the tape) maybe the kangaroo would have been behind me.”

The HTP Mercedes was the next big player to come unstuck. Starting 11th, Thomas Jaeger cut through the field to run second by the 90 minute mark, at which point he pitted with a loose right-front wheel.

The damage had been done in the early laps when the German barged Rick Kelly’s Nissan out of the way at Forrest’s Elbow. The HTP entry sits eighth, two laps down, after six hours.

Kelly had the Nissan in the top five throughout his opening stints before handing over to Katsumasa Chiyo, who was in the car when its day dramatically ended in the third hour.

The GT-R made heavy contact with the Clearwater Ferrari at McPhillamy Park, destroying both cars.

Hiroshi Hamaguachi had hit the wall at Sulman Park, splitting the radiator on the Ferrari, which subsequently spun on its own fluid.

““It was so unfortunate,” said Chiyo.

“Unfortunately, it’s over. The Nissan Nismo staff did very hard work coming to Australia for the Bathurst 12 Hour race. So we are very disappointed.”

The M Motorsport Lamborghini was the next to fall in Hour 4, with Ross Lilley running wide and spinning into the wall at McPhillamy as he let leaders Schneider and Van Gisbergen through.

Lilley walked away from his crash despite the car making heavy driver’s-side contact with the concrete.

The early attrition follows a pre-race build-up that saw four GT entries withdrawn due to accidents.

See below for vision of the Clearwater/Nismo incident

See below for a sample of the Mercedes and McLaren battle