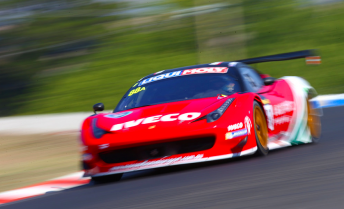 Mika Salo put sentimental favourites Maranello Motorsport in the box seat to win the Allan Simonsen Pole Trophy by breaking into the 2:03s bracket in first qualifying at the Bathurst 12 Hour.

With the day’s fastest times expected to come in the cool of the morning, teams were left frustrated as two lengthy red flag periods saw the majority of the 60 minutes run under red flag conditions.

A clean 15 minutes at the end of the hour then produced a string of fast times, with Salo clocking a 2:03.94s as the chequered flag flew.

The time was a full 0.8s quicker than that managed by Maro Engel and Rick Kelly, who had set their best times just seconds earlier.

Shane van Gisbergen showed the potential of the Quinn McLaren to end up fourth ahead of Christopher Mies, Rene Rast, Markus Winkelhock, Will Davison, Steven Richards and Maximillian Buhk.

This year marks the debut of the pole trophy named in the honour of former Maranello driver Simonsen, who was killed in last year’s Le Mans 24 Hours while driving an Aston Martin. “We need to keep the trophy for Allan Simonsen. He would have been on the pole anyway, so it’s good to get it for him,” Salo told Speedcafe.com.

“It was a clear lap from the traffic but it wasn’t a clean lap, there were a few mistakes from me,” he added of whether the times will be faster this afternoon.

“I don’t know how hot it will get this afternoon, but there is more in the car, definitely.”

The session’s first stoppage had occurred at just the seven minute mark after a big crash for Jason Bright at Reid Park.

Briefly knocked unconscious after the incident, Bright walked away from the heavily damaged Skwirk Audi before being taken to Bathurst hospital for further checks.

The team immediately began stripping damaged parts from the car once it was returned to the pits in order to assess the extent of the damage.

“The guys from Melbourne Performance Centre will work there hearts out and see if we can fix it,” Bright’s co-driver Warren Luff told Speedcafe.com.

“It’s obviously disappointing for Jason, (but) he’s a tough old dog so he’ll be fine.”

The Porsches of Shane Smollen and Garth Walden also took damage in the aftermath of the crash.

The session went green again after a near 25 minute recovery, only to be stopped once more after a single-car accident for the Ben Schoots-driven Daytona Coupe at the exit of The Cutting.

A second full field qualifying session will get underway at 1330 before the Class A only hit-out from 1420.

UPDATE: The MPC team has declared that the Skwirk Audi is too badly damaged to be fixed in time for the race.