Latvala leads after Ogier slips up in Sweden 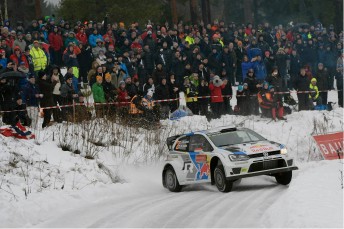 Volkswagen has its third different leader at the end of a dramatic day of Rally Sweden with Jari-Matti Latvala heading the field after World Champion Sebastien Ogier dropped out of contention.

The Finn is 3.6sec clear of colleague Andreas Mikkelsen with one day remaining, with Mads Ostberg (Citroen) a further 39.4 seconds behind his fellow Norwegian.

A moment’s lack of concentration saw Ogier bury his Polo R into a snowbank on the opening stage of the day losing four and a half minutes in the process. Two stages later Mikkelsen dropped his car into a ditch and although he lost only a handful of seconds, it was enough for Latvala to move ahead. His lead reached 10sec, but his speed wore his tyres and he lost much of his advantage limping through the final two short tests on well-used rubber.

“My tyres were finished and I Iost a lot of time in such a short stage,” said Latvala.

“It wasn’t a good feeling but I saved tyres yesterday so I have good rubber for the final day tomorrow. Everything is going in the right direction but I need to be really focused for the final leg.”

Ogier, who won four consecutive stages in the afternoon climbed to ninth in the last stage.

After being tied overnight, Ostberg edged clear of Mikko Hirvonen (Ford) and is 19.7sec ahead of the Finn’s Ford Fiesta RS.

Hirvonen slipped behind Ott Tank this afternoon after being held up by Robert Kubica, but he regained fourth and is 6.0sec ahead of the Estonian. Kubica plunged down the order after losing 20 minutes when he twice went off into the snow.

It was a tough day for Hyundai with Thierry Neuville retiring in the opening stage with broken front right suspension while Juho Hanninen pulled the front right wheel off his car when the test was repeated.

Snow was an increasingly rare commodity. With temperatures climbing to 3°C and rain falling, the road surface was gravel rather than the usual ice and careful tyre management was essential to preserve the studs.