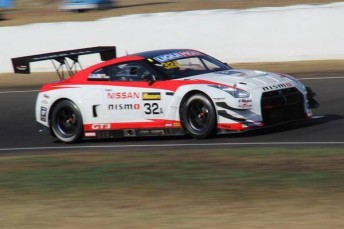 Buncombe turned the fastest lap in the Nissan GT-R

Alex Buncombe took Nissan’s GT-R to the fastest time in the second full field practice session of the day at the Bathurst 12 Hour.

The Briton’s early 2:06.6s proved good enough to beat the team’s Phoenix Audi and JBS Lamborghini competition for the remainder of the 60 minutes.

The #9 Melbourne Performance Centre Audi was fourth fastest despite losing significant time during the session with a battery problem.

Craig Lowndes enjoyed his first laps of the weekend aboard the Maranello Ferrari, clocking the fifth best time while adjusting to the resurfaced circuit.

“The track itself is really smooth and the grip level is obviously building,” he noted.

“The cambers aren’t as pronounced as they were before so we’re just getting used to the idiosyncrasies of that.

“The traffic out there is a bit crazy, but that’s the name of the game at the 12 Hour.”

The #68 Motorsport Services Porsche suffered heavy damage after a crash on Conrod Straight with David Glasson at the wheel.

Also in trouble was the Tony Quinn McLaren, which stopped on the circuit three times due to electrical problems.

The MP412C ended the session parked on Mountain straight before being towed back to the pits.

The AF Corse Ferrari meanwhile missed the entire session while the team works on front-end damage sustained in its earlier incident with the now withdrawn Vicious Rumour Ferrari.

CLICK HERE for all of the day’s session results