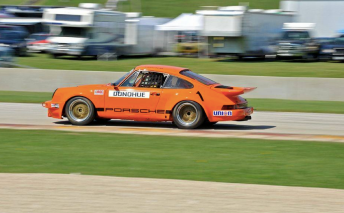 A distinctive orange Porsche 911 that carried Mark Donohue to his final win before his death is confirmed for the 25th Anniversary Phillip Island Classic Festival of Motor Sport from March 7-9.

Indy 500 winner and CanAm champion Donohue won in the 1974 Carrera RSR 3.0litre coupe months before his death in practice for the Austrian F1 grand prix in 1975.

The 911 was one of just 15 special, mechanically-identical 911 Carrera coupes built by Porsche for elite racing drivers to contest the International Race of Champions (IROC) series in the United States during 1974.

Donohue was the first pro driver to race for the famous Roger Penske in the late 1960’s and holds a special place in Penske’s history, not-the-least for winning the team’s first Indy 500 in 1972.

The sublimely gifted Donohue was also the test pilot for the wicked Type 917/30 Cam-Am sports car with its astonishing 1500bhp that dominated in 1973.

Although still in excellent condition 40 years on, the 911 required some work by Porsche Centre Melbourne Racesport specialist Peter Bowen to return it to its original factory specification.