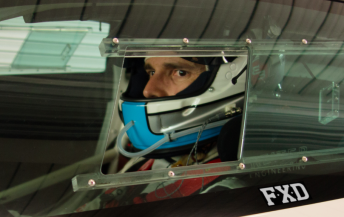 Simply getting his Lamborghini to the grid unscathed remains the aim for Eric Bana ahead of qualifying day at the Bathurst 12 Hour.

The movie star has returned to the race this year for the first time since 2010, when he campaigned a Mitsubishi Lancer Evo X.

He is this weekend paired with fellow non-professional drivers and long-time friends Peter Hill and Simon Middleton in the former’s Class B Lamborghini Gallardo GT3.

Bana set the 111th fastest time out of the 146 drivers to take to the track on Friday; his best some 10 seconds slower than that managed by Middleton.

With high-profile Ferrari entry Vicious Rumour Racing crashing out of the weekend as Bana stepped into his car for the first time during the morning, the Lamborghini driver has been doubly determined not to fall foul of the same fate.

“I haven’t been here for three years and I’ve only had the one test day in the car, so the approach is really about Sunday.

“We really want to get to the grid. We’re really mindful of how easy it is to stick it in the wall on the Friday or Saturday.

“I’ve been here before and as long as I drive within my limits and build up speed gradually I think I’ll be fine,” he continued.

“We’re in the slightly fortunate position of having three gentleman drivers so we don’t have that pressure of having an A driver.”

Although just a single test day in the Lamborghini prior to the event appears to be slim preparation for such a relatively inexperienced racer, Bana says that he is relishing the challenge.

“I feel like I’m in my comfort zone, I genuinely enjoy it,” he said of racing.

“It’s not overwhelming or scary, certainly not compared to being on a bike or something like that.

“I guess that’s one of the good things about this track. Even on four wheels it feels more like you’re on a motorcycle because there are so many things that can catch you out.

“With the rise and fall it’s just a bit more physical.”

The Bathurst 12 Hour is a dramatically different event to the last time that Bana raced in it, with the move to include GT machinery bringing with it a new level of competition.

“The Lambo is great to drive, but to be honest I had a great time the last year we were here in the Evo,” he said when asked of the race’s progression.

“When the event switched over to GT3 I wondered how it would go. I felt it was starting to get some good momentum as a production car event.

“It was probably never going to attract the same level of international drivers and teams as it does now that it’s GT3, but I just hope we can continue to get the (grid) numbers.

“The biggest thing for me (comparing 2010 to now) is that the number of A-level drivers here is really significant.

“It’s like there’s a V8 Supercar race going on in the middle of a GT race!”