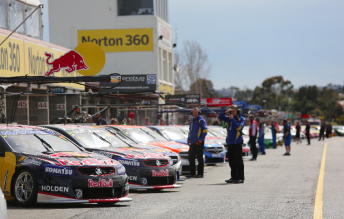 Russell Ingall’s Lucas Dumbrell Motorsport Holden will have its own pitboom this season, V8 Supercars has confirmed.

The release of the complete pitlane order follows Wednesday’s confirmation of a 25 car grid for the new season.

This year marks the first time that an odd number of cars have competed since 2010 and ensures that Ingall will not have to deal with the pit stacking issues of all other teams.

The situation is a mixed blessing for the small outfit however as it must front with a full pit crew.

The only squads sharing crews this season will be Brad Jones Racing and Tekno Autosports thanks to the latter’s scaling back to one car.

The pitlane order is set based on the finishing order of the previous year’s teams championship, with allowance made for single, three and four car grouped outfits.

See below for the full pitlane order