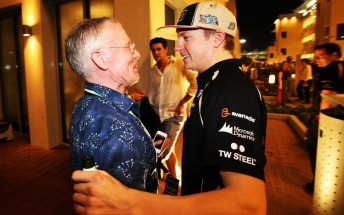 Robertson, 70, has long been associated with the career of Kimi Raikkonen and was instrumental in cutting a colossal deal for the Finn’s first move to Ferrari when he won the world championship in 2007.

The Briton was also responsible for Jenson Button’s arrival in F1 with the Williams team in 2000.

On hearing news of Robertson’s death Button tweeted: “Very sad to hear that David Robertson who helped me reach my dream of racing in Formula one has passed away. My thoughts are with his family.”

The Robertson/Raikkonen alliance was tremendously successful and considered as powerful as that of the former Michael Schumacher/Willi Weber association.

During an interview a number of years ago Robertson senior was asked why Raikkonen had become so popular with fans around the world.

Mazepa was the boss of Russian Time which took the GP2 Championship in its first year in 2013.

The outfit is one of three teams that star Kiwi driver Mitch Evans is currently in discussions with for the coming season after his strong GP2 series debut with Arden International last year.

Evans took to social media to offer his sympathy: “Wow shocked to wake up to the passing of team principal of Team RussianTime, Igor Mazepa. Thoughts go out to his family and the team.”