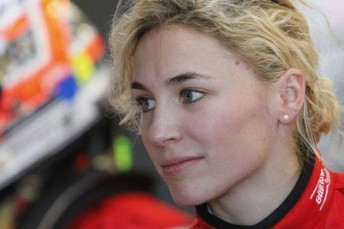 Frey is part of an imposing combination in the Phoenix Racing Audi R8, which is one of six Audi customer team entries in the event.

Her team-mates Laurens Vanthoor and Rene Rast, who are the current FIA GT champion and a three-times Porsche Supercup title winner respectively, are considered among the favorites to take out the half-day marathon.

Despite her top-level experience, Frey is classed as the squad’s unseeded driver and could prove the true trump card in the line-up.

“Laurens and Rene are very successful in the Audi R8 around the world,” Frey said ahead of the weekend.

“I feel very comfortable in the R8 as well and was able to clinch a few successes in the Chinese Audi R8 LMS Cup.

“But my team-mates will probably teach me a few more things.

“If I can keep up with them at Bathurst I will have achieved my goal. Afterall, team-mates are always the best benchmark.”

Frey says she began preparing for her Bathurst debut and her first visit to Australia, several months ago.

“Through intensive strength training I managed to gain a bit of weight,” she said.

“The additional job as an instructor for the Audi driving experience was helpful too as it gave me regular driving practice.

“I’ve watched many onboard videos in preparation for Bathurst and really played the PlayStation (Mount Panorama game) a lot.”

Frey is only too aware that the combination of a cracking field and one of the most challenging tracks in the world amounts to her most difficult challenge to date.

“The competition is fierce and there are a lot of local heroes who know the track like the back of their hand,” she said.

“That means we’ve got to get used to the track as quickly as possible.”