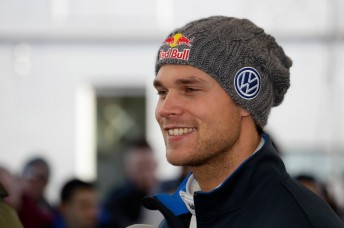 All smiles for Adreas Mikkelsen in Sweden

The Norwegian completed the 1.9km side-by-side test 0.8 seconds quicker than reigning world champion Ogier, who said he picked the poorer lane for grip at the start of his match-race with Robert Kubica (12 overall).

“I was a bit rusty with my driving for the first couple of corners because I haven’t tested in the snow since December. But I had a clean run and it’s a great way to start the rally,” said Mikkelsen.

Ogier was a further 0.6s quicker than Ott Tanak (Ford Fiesta RS). The Estonian, starting his first event since the 2012 Rally of Spain, prevented Jari-Matti Latvala making a VW clean sweep of the top three by just 0.2s.