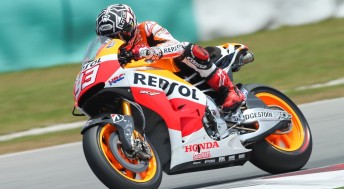 Marc Marques was fastest on all three days in Malaysia

MotoGP World Champion Marc Marquez has put a line in the sand completing the three day test at Sepang once again with the fastest time.

The Repsol Honda rider set a time of 1’59.533 in cooler temperatures during the morning, his time just under a tenth faster than the previous best test time of 1’59.607, set by Australia’s Casey Stoner also on the Honda prototype in 2012.

Marquez later produced a strong performance in a race simulation with 15 consecutive laps under the 2’01 mark.

The early running had seemed more like a qualifying practice than a test session with the top riders battling each other for top spot in a time attack.

Nine-time World Champion Valentino Rossi set his own personal best Sepang test time of 1’59.727, whilst Jorge Lorenzo clocked the third best time of the day with a notably quick 1’59.866 effort on just his second lap.

Like Marquez, both Yamaha Factory riders later produced longer runs as they too worked on tyre durability and fuel consumption in preparation for their battles this year with the incoming ‘Open’ class machines – which will have a 24 litre fuel limit compared to the 20 litre capacity of the Factory entries.

Showing the potential of the new ‘Open’ bikes was the consistently impressive Aleix Espargaro on the FTR Yamaha of NGM Mobile Forward Racing, with his 1’59.998 best time coming on the seventh of 43 laps.

A new Bridgestone tyre was also tested by the riders this week – a similar construction to that used in Valencia testing in November, with a compound slightly adapted to suit the Sepang heat.

The premier class riders will be back in action at the Sepang International Circuit for further testing from 26th to 28th February.

Next Story Suzuki's Laverty sets the pace in Island tests