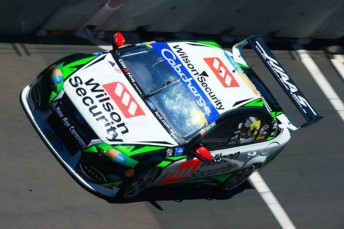 Dick Johnson Racing will head into the 2014 season with a strengthened in-house technical team following the recruitment of two new engineers.

This year marks DJR’s first season under the control of Campbell Little, who took over the role of sporting director in November following a four-year stint at Ford Performance Racing.

Among Little’s key tasks over the off-season has been to manage DJR’s staff roster, which remains at a relatively lean 22 following the financial pressures that the team faced throughout 2013.

The latest moves see David Wall reunited with race engineer Chris Stuckey, who he worked alongside at Brad Jones Racing two years ago.

“It’ll be a headstart for David and Chris that they’ve worked together before,” Little told Speedcafe.com of his team’s new race engineer.

“We had a lot of international interest for the position but Chris is highly rated by the teams he’s been with before and comes with the blessing of Erebus, who no longer had room for him (following its downsizing from three to two cars).

“We have a couple of other new mechanics and body guys as well and are now working on just getting the race track pit crew stable.

Despite De Borre’s move back into the factory squad full-time, the basics of the DJR-FPR technical relationship will continue for the new season.

The two Ford outfits will continue to run different engine packages, however, with DJR’s own powerplants remaining under the control of Steve Amos, who split from long-time business partner Roger Higgins last year.

Little says engine performance has been an area of improved focus over the off-season.

“The engine department has had a good couple of months getting back to basics and finding little bits and pieces,” said Little.

“Last year there wasn’t enough money spent on the engine front to make them the best they can be in a few areas, so there’s been some gains made there.”

DJR endured fluctuating fortunes throughout its 2013 campaign, with the mid-season arrival of Mostert and increased FPR support turning the team from rear-of-field runners to winning contenders.

Despite the results in the second half of last season, Little warns that expectations must be kept in check for the new year.

“I’m fairly certain that Scott’s targets will be Chaz Mostert, Scott McLaughlin and those other young blokes that he’s come through with.

“David showed some very strong signs last year but struggled for consistency, so my goal is to try and keep that level higher.

“You’ve got to keep a realistic outlook though because you’re fighting against the likes of Triple Eight, FPR and HRT, as well as now Kellys and Volvo and so on.

“Consistently doing the best job with what we’ve got will certainly be the goal for the first part of the season.”