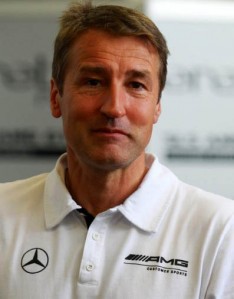 The 49-year-old German won the Bathurst 12 Hour on debut with Erebus Motorsport as part of a season that also saw success in the Dubai 24 Hour, Nurburgring 24 Hour, Spa 24 Hours and Gulf 12 Hours.

Schneider is back for more Bathurst action this year, rejoining Erebus alongside new co-drivers Maro Engel and Nico Bastian.

Speedcafe.com’s Stefan Bartholomaeus spoke to the Mercedes legend ahead of the event.

SPEEDCAFE: Bernd, you’re back for a second time at the 12 Hour. What were your lasting impressions of the event and circuit from last year?

BERND SCHNEIDER: I really enjoyed the race because I’d heard so much about the circuit over many years.

(Schneider had planned to compete in the 1990 Bathurst 1000 with Allan Moffat’s Rudi Eggenberger-supported Ford Sierra team before being called up to race for Arrows in the Spanish Grand Prix).

I was so happy when I heard last year I could come and finally drive the circuit. It’s something special. I enjoyed every lap.

Before the race we didn’t believe we could win, but once the race started it just got better and better.

SPEEDCAFE: It was interesting to watch your progress through the weekend last year because there were some that thought you’d have it mastered in one session. In practice it was more difficult than that…

SCHNEIDER: The problem was that all three of us (co-drivers Thomas Jaeger and Alexander Roloff) were new last year and we all had to learn the circuit.

We had to share the driving time between us and in the practice there were so many red flags and so much traffic. Going to the limit was very difficult.

Near the startline it’s quite easy, it’s not difficult to pick up. But going into the Mountain, finding your braking points it’s difficult to get to the limit when you’re not getting clear laps.

If you’re over the limit it’s a big shunt here so you have to be very careful. That’s why we weren’t quick in practice or qualifying, but the target had to be the race. Schneider and Erebus have returned to defend their 12 Hour trophy

SPEEDCAEFE: This year you’ve got Nico, who hasn’t been here before. Can experienced team-mates, like you had last year with Tim Slade and Lee Holdsworth, help out a lot? Or is it just about giving a new driver time in the car?

SCHNEIDER: Well, last year we saw that it was good with Tim and Lee. They were quite quickly on the limit and we needed to take their data for their braking points.

It showed where we were losing the time and what we needed to work on. The track walk, explaining the bumps and everything was important as well. It certainly helps.

SPEEDCAFE: Do you feel that you’ll need to do a better job again this year to win the race with the competition that’s here?

SCHNEIDER: The level was quite high last year already, but this year there are even more cars that are quick, defintely.

It will be more difficult, but like everywhere we go and do long distance races, the competition gets harder each year.

I think we’re in a good position. We’ll have a good chance.

SPEEDCAFE: A big topic pre-race here is always the driver seedings and who has squeaked in unseeded. Is that going to play a big part in the result?

SCHNEIDER: Of course, it’s very important. If you look at the (Phoenix) Audi line-up, I really don’t know who is the unseeded driver in this car.

It’s the way it is (the seeding system). You just have to try and get the best out of it.

I think we have a good line-up with Nico as the unseeded driver. He’s also quite good. You have to play the game…

SPEEDCAFE: Do you have a feeling on how fast the cars will be this year in qualifying with the new surface?

SCHNEIDER: Well it depends. Normally with a new surface it’s quite slippery, which could be the case here.

We won’t know until we get on the circuit and, even then, you have to understand that the grip will improve a lot throughout the whole weekend.

SPEEDCAFE: Now that you have finally experienced Bathurst, do you see yourself becoming a permanent fixture at this event over the next few years?

SCHNEIDER: Well, my racing career was over in 2008 when I retired from the DTM, but now I do it for fun.

I’m not here to win the race, I’m here to enjoy the race. I try my best to win, but I don’t need to win to build up my career. My career is over anyway.

I just race for fun and as long as I’m enjoying it and am quick I will keep coming back.