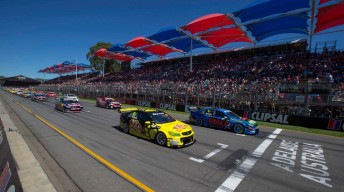 The release of the official entry list for the 2014 V8 Supercars Championship has confirmed that the field will consist of just 25 cars.

D’Alberto, whose family had been working on a possible alliance with Tekno Autosports as late as this week, is now expected to line-up alongside Tim Slade at Walkinshaw Racing in the Pirtek Enduro Cup.

Together with the reduced field from 28 runners last season the entry list confirms number changes for two RECs.

The James Rosenberg-owned license, which has moved from Erebus to Walkinshaw for the new season has swapped #47 to #222, allowing Nick Percat to carry over the number he had previously run in the Dunlop Series and Carrera Cup.

The Walkinshaw  Racing Supercheap REC meanwhile moves from #66 to #47, ensuring Slade retains the plate he drove under at Erebus.

Other previously known changes see the #97 REC renumbered to #16 in line with is move to DJR.

The #19 Tekno REC has subsequently been changed to #97 to ensure Shane Van Gisbergen can continued with his preferred plate.

Despite 25 cars marking the lowest field size in recent history, V8 Supercars remain defiantly optimistic that the field is among the most robust the series has attracted.

“The quality and depth of this field is without doubt one of the best we have had,” V8 Supercars CEO James Warburton said.

“V8 Supercars continues to produce one of the largest grids by any global standard which will assure that we continue to see the remarkable racing, multiple race winners and close finishes that we did across 2013.”