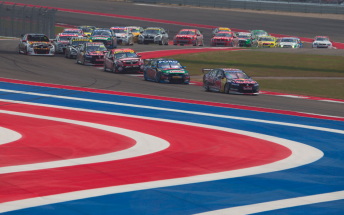 The V8 Supercars at the Circuit of the Americas last year

V8 Supercars CEO James Warburton and COO Shane Howard are in the United States this week scouting for a second American race to join the 2015 calendar.

The category made its debut on US soil at the Circuit of the Americas in Austin, Texas, last May and is scheduled to return to the venue next year.

Although the one-year sabbatical is officially taking place due to a date clash with the X Games, the high cost of importing the series is understood to have played a significant role in the pausing of what was touted as a five-year agreement.

Finding a second North American event with which to twin the Austin 400 would be highly desirable for both parties.

COTA vice-president Steve Sexton publicly threw his support behind the concept during the inaugural event.

The likelihood of securing a second US fixture appears to have been boosted by the growing relationship established between V8 Supercars and US business mogul Roger Penske.

Having met with category officials during one of multiple visits to Australia last year, Penske is understood to have provided several introductions for Warburton and Howard’s seven-day trip.

V8 Supercars has naturally been linked to the Belle Isle IndyCar Grand Prix event which Penske promotes, while venues understood to be on this week’s itinerary include the formerly Penske-owned Auto Club Speedway’s road course in California.

A V8 Supercars spokesman confirmed to Speedcafe.com that Warburton and Howard are currently in the USA on a fact-finding mission, but declined to be drawn on details.

The championship has made no secret of its desire to increase its international footprint however, with Warburton speaking bullishly upon the announcement of the Australasian-only 2014 V8 Supercars calendar.

“The first Austin 400 was an enormous success at all levels and a tremendous platform to build into the future; in conjunction with developing an extensive international strategy for 2015 and beyond,” he said at the time.

“The prospects are virtually limitless; there is that much potential in the sport.”

The extent of Penske’s future involvement in V8 Supercars meanwhile will likely remain a key talking point throughout the coming year.

Following the appearance of Penske Racing president Tim Cindric at December’s Sydney 500, Penske told media last month that he could be ready for a team-based commitment as early as 2015.

Such a move, however, will likely depend on Ford and its yet-to-be-determined position on developing a new Blue Oval product for the category beyond the current Falcon.

Although an announcement of a deal between Ford Performance Racing and the now Penske-distributed Western Star trucks raised eyebrows in some quarters last week, such agreements are unlikely to be accurate pointers towards deeper ties.