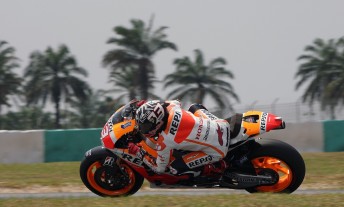 World MotoGP champion Marc Marquez has continued to dominate pre-season testing backing-up his fastest time on the opening day at Sepang in Malaysia with the quickest time on the second day of running.

While the Repsol Honda Team rider grabbed most of the attention, plenty of praise was also given to NGM Mobile Forward Racing’s Aleix Espargaro who put an Open specification bike inside the top five for the first time.

The World Champion smashed through the two-minute barrier shortly before his lunch break, after which there were substantially less changes in lap times. The one target still to hit is Casey Stoner’s 2012 pre-season time of 1’59.607.

Jorge Lorenzo (Yamaha Factory Racing) was sixth; the former double title winner working to improve handling issues he encountered on Day 1 as a result of setup changes made in a bid to improve fuel consumption. The 2014 the Factory Option bikes are limited by a further litre of fuel to just 20 across a race distance.

Today will mark the third and final day of this week’s Sepang test.

See below for day 2 test results at Sepang