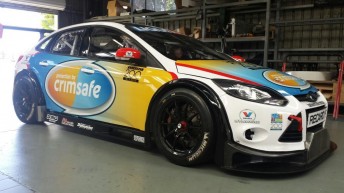 Television personality Grant Denyer will make a return to racing in this weekend’s Bathurst 12 Hour, driving the third of the MARC Focus V8 entries.

A former full-time driver in V8 Utes and the V8 Supercars Development Series, Denyer has focussed on his television career in recent years.

Sponsorship for the third entry, which was uncertain to compete as recently as last week, has come from Denyer’s long-time backer Crimsafe and oil company Valvoline.

It will sport the number #200 as part of the Bathurst City Council’s bicentenial celebrations set to take place in 2015.

Formed out of a partnership between Pace Innovations and Ryan McLeod’s Racer Industires, the three MARC Focus entries have been designed and built in Queensland.

The cars features a racing version of Ford’s Coyote V8 engine and are expected to lap near the pace of the Class B GT3 entries.