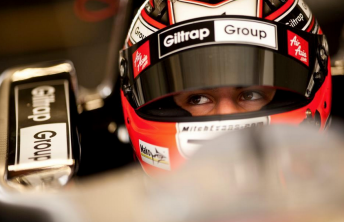 Kiwi Mitch Evans is edging closer to a new GP2 deal that would see him spend a second season in the official Formula 1 feeder series.

The Aucklander impressed during his debut GP2 campaign last year for the Arden International outfit but has missed out on a seat with the team for 2014.

Evans had been hoping to announce his plans with a new GP2 team early in the New Year but the decision has been delayed.

The 19-year-old is continuing discussions with leading GP2 teams Russian Time and Racing Engineering, with whom he both tested in post-season runs late last year, along with a third unnamed outfit.

Evans scored four podiums and 56 points for Arden last season and remains adamant he will be on the grid with a fresh deal looming as a possibility next week.

“Things have just been delayed a bit but I should have something sorted for next week,” Evans told speedcafe.com.

“I have been in touch with my management regularly and they have just told me to be patient. It’s all looking good we are just trying to make the right the call.

“At the end of the day it comes down to our funding and the fact we are trying to place ourselves in the best situation possible.

“We are still speaking Russian Time and Racing Engineering but there is another team that is very heavily in the mix as well.

“I will be on the grid but I just don’t who with yet. Obviously you want to be with who you think is the best. Its been a bit of a long process which can be pretty good.”

The GP2 grid is starting to take shape with ART Grand Prix announcing McLaren F1 reserve driver Stoffel Vandoorne and Japanese star Takuya Izawa as part of their line up.

Although the majority of the grid have not revealed their driver line ups, Evans believes the 2014 season is set to be hard fought.

“I think its going to be super competitive in GP2 this year,” Evans added.

“There are a number of drivers switching over from World Series by Renault. There are a lot of third and fourth year drivers signing with teams so its going to be really tough.

“Both teams and drivers will have to perform well this year to be competitive.

“Whoever wins the championship this year will be very deserving. It is another reason why I want to put myself in the best situation.”

Evans will head to back to Europe this week as he steps up his preparations for the new season after spending the Christmas and New Year period in New Zealand.