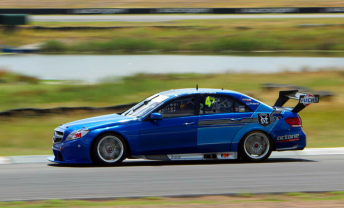 Jack Le Brocq is behind the wheel of EM03 at Queensland Raceway. pic: Matthew Paul Photography

Erebus Motorsport is today undertaking its first V8 Supercars track test of the year, with Academy driver Jack Le Brocq behind the wheel of one of its E63 AMGs.

The test is an Evaluation Day for the 21-year-old Le Brocq, who is preparing for a Dunlop Series campaign this year after impressing in Erebus’ GT cars during limited outings in 2013.

The day will also allow the team to test a number of new components that it has developed ahead of its second season in the V8 Supercars Championship.

Le Brocq enjoyed a brief spell behind the wheel of the team’s #9 E63 (EM01) at a Calder Park ride day last year, in addition to cutting laps in Dunlop Series and Kumho Series equipment.

The Ipswich hit-out is taking place with the ex-Tim Slade EM03, which will act as the team’s spare in 2014 following the downsizing to two cars.

“We’ve got a few things that we want to get some miles on and it’s a good opportunity for Jack to get some laps,” team manager David Stuart told Speedcafe.com of the Ipswich test.

“Jack came out to the ride day (last year) and we gave him a couple of laps there to give him a test for it and get the feel of what he’s like.

“He’s had some laps in other cars since then, so today gives us the opportunity to do a full evaluation of where he’s at.”

Le Brocq competed in the final round of last year’s third-tier Kumho V8 Touring Car Series with MW Motorsport and is now understood to be closing on a deal to enter the Dunlop Series with Terry Wyhoon’s expanded Image Racing.

The Erebus Academy and Le Brocq’s own management are both continuing to work on finding the budget to start the season.

He is unlikely to score a seat in Erebus’ Pirtek Enduro Cup line-up however, with Craig Baird expected to return alongside Lee Holdsworth and Alex Davison tipped to join brother Will in the second entry.

Erebus meanwhile resisted the temptation to give star recruit Will Davison his first laps in a Mercedes V8 Supercar at today’s test.

The permissible 10 laps of running for a Primary driver during an Evaluation Day will be undertaken by Lee Holdsworth.

“Will is busy with the 12 Hour and we wanted to leave him to focus on that,” said Stuart.

“Lee being familiar with the cars can also jump straight in and give Jack a really good benchmark.”

Holdsworth has missed out on joining Davison and Le Brocq in the team’s Bathurst 12 Hour campaign due to the event’s driver seeding rules.

His brother Brett will be in action during the HQ Holden support races, however, stepping in to co-drive with Queenslander Ian Mundell, who found himself without a partner following the late withdrawal of the pair’s father Glen.

Craig Baird is also competing in the Kenda HQ Endurance Bathurst Classic, stepping between the Holden and the Clearwater Ferrari that he’ll drive in Sunday’s race.