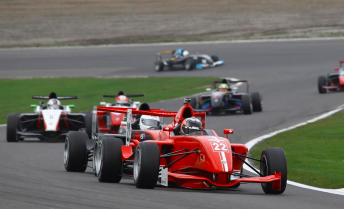 The deal with Lechner Racing was brokered jointly by Mark Larkham and his long time friend and driver manager Greg Siddle.

The NEC Championship forms part of the 1.6, 2.0 and 3.5-litre Formula Renault ladder system.

Second generation grand prix racer Kevin Magnussen is the most famous product of the Renault series after being pitched into McLaren’s F1 team this year following his win in the Formula Renault 3.5 Series in 2013.

De Pasquale is preparing to base himself in the Austrian city of Salzburg for his European debut year.

“A lot of effort and commitment by many has allowed this to happen. It’s a dream for any young aspiring race driver,” De Pasquale said.

“It’s a tough gig, I’m up for it – I have a top drive and I want to succeed, so I intend to make the most of this fantastic opportunity.”

Larkham said: “We think Anton’s a bit special, and Mick Ritter at Sonic, Anton’s parents and his sponsors have done a great job bringing him to this point.”

De Pasquale will commence a shakedown test ahead of an extensive pre-season test program commencing late March at Hockenheim, Assen and Zandvoort, prior to the first round kicking off at Circuit Zandvoort near Amsterdam on April 21.