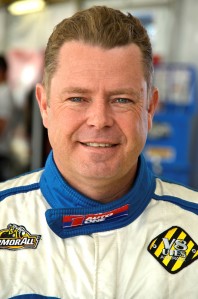 V8 Ute racer Cam Wilson begins his longest drive at midday in an attempt to break the world record for the greatest distance travelled indoors in a 24 hour period at the wheel of a go-kart.

Wilson will attempt the feat at the Brisbane Indoor Karting Centre he operates in a bid to crack the existing record of 503km.

The Gold Coast-based Wilson, who also operates the Indoor Karting Centre in his home city, is attempting to raise funds and lift awareness of Huntington’s Queensland, the state body that supports those suffering from the genetic disorder.

Wilson’s go-karting marathon, which is scheduled to conclude at midday on Wednesday, February 5, was originally scheduled in November last year however Wilson was badly injured in a huge accident in the Utes race at the Armor All Gold Coast 600 event in late October.

His #25 Ford was destroyed after contact from David Sieders on the beach chicane.

However he has recovered and is excited about setting a new world record for a cause he holds close to his heart.

“I’m really looking forward to it. I know I’ll be feeling the pain when I finish and can hopefully walk afterwards but it’s really worth it. I’m feeling nervous, but fighting fit so bring it on,” the 39-year-old Wilson said.

His 66-year-old father, Murray, suffers from Huntington’s disease, a genetic disorder that affects muscle co-ordination and leads to cognitive decline and psychiatric problems.

“My father had symptoms from the age of 44, but was not diagnosed until he was 55. It has been a shocking thing to watch it take over his body and mind,” said Wilson.

“I have great hope of a cure being found in my lifetime, and most certainly in Ellie’s, but that will only happen if medical researchers receive the necessary funding.”

“Everything we make on the day will go to Huntington’s Queensland and I’ll be presenting them with the cheque on Wednesday afternoon, let’s hope it will be for fifty thousand dollars,” said a hopeful Wilson.

Wilson, whose injury at the Gold Coast event stopped him from from completing the 2013 Utes Championship, will make his return in the series in Adelaide from February 27-March 2 for the opening round of the 2014 Australian V8 Utes Championship.