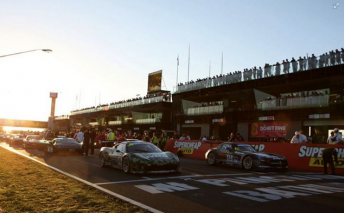 A selection of the world’s best GT drivers will descend upon Mount Panorama this weekend for arguably the most unpredictable Liqui-Moly Bathurst 12 Hour yet.

The event is rapidly becoming one of world’s leading 12 hour races, attracting the highest calibre of drivers and teams.

This year the grid features some of the world’s best GT drivers in amongst ex-F1 stars, touring car legends and V8 Supercar racers.

The field can lay claim to more than 100 major global titles and race wins.

While there are 44 cars entered in six classes for the once round the clock endurance race, the 2014 winner is most likely to come from Class A. The category for the latest spec GT3 machines features 15 world class entries.

Calling a winner for this year’s race is particularly difficult with an abundance of talent on the grid. Have a read of our form guide before casting your vote on the Pirtek Poll.

STRENGTHS: This team is a well oiled outfit after tasting victory with Bernd Schneider last year. The five times DTM champion has won countless races driving a Mercedes SLS AMG GT3 and will be joined by Maro Engel, who has experience of both the cars and the circuit.

WEAKNESSES: Hard to find a weakness here. Nico Bastian is a circuit rookie, but will likely be among the very strongest unseeded drivers.

WEAKNESSES: Neither of the trio have driven the Mount Panorama circuit previously and may need time to get up to speed. Otherwise a very strong entry.

STRENGTHS: Jason Bright and Warren Luff have more than enough Mount Panorama circuit knowledge to be on the pace from the start.

WEAKNESSES: Although he won the race twice under its production car guise, Rod Salmon’s pace compared to other more renowned and experienced unseeded racers in the GT field is a clear weakness. The addition of Liam Talbot this year will at least enable the team more flexibility with its driver windows.

STRENGTHS: German GT ace Christopher Mies has more than proved his skills at Bathurst by taking out the 2012 race while the Audi package should keep going all day.

WEAKNESSES: Overall, the driver line up is weak compared to other teams in the field with two unseeded drivers.

STRENGTHS: Roger Lago is a seasoned campaigner and is joined by two quick and experienced drivers in David Russell and Lamborghini works driver Peter Kox. The latter has tasted a class victory in the Le Mans 24 Hours.

WEAKNESSES: The Lamborghini has not been the most reliable of cars in the past and has an ability to find trouble at event previously.

WEAKNESSES: Winkelhock has never driven Mount Panorama nor competed with this team previously, but both should prove only minor hurdles for the one-time F1 racer.

WEAKNESSES: The entire squad including its car and driver line up will be making their Bathurst 12 Hour debut.

STRENGTHS: The Clearwater Racing squad have proven outright pace with Craig Baird and Matt Griffin, and have finished on the podium for the past two years running. The team are due a win having been in contention last year.

WEAKNESSES: Mok Weng Sun has struggled at the event but the addition of Hiroshi Hamaguachi will at least decrease his required time behind the wheel.

STRENGTHS: Scotsman Andrew Kirkaldy has played a large part in the development of the McLaren Mp4-12C GT3. Klark Quinn won the 2013 Australian GT Championship and has proven speed.

WEAKNESSES: The reliability of the McLaren is unproven in 12 Hour races and this will be its first Bathurst endurance event.

STRENGTHS: Reigning Bathurst 1000 champion Steve Richards and V8 Supercars pilot Dale Wood will get the maximum out of the car.

WEAKNESSES: The M Motorsport Lamborghini has only recently arrived in Australia and is unraced by the team.

STRENGTHS: Tony D’Alberto and Dean Canto have plenty of Mount Panorama experience to draw from.

WEAKNESSES: The team is relatively inexperienced with Tony DeFelice and his team only entering the world of circuit racing in 2012. Like the M Motorsport Lamborghini, this car is also new and unraced.

STRENGTHS: Erebus have won the event previously and shown the utmost competence throughout their GT program in Australia and abroad.

WEAKNESSES: Simply, the strength of the Erebus #1 entry of Bernd Schneider, Maro Engel and Nico Bastian appears the main hurdle for the #63 SLS to overcome.

STRENGTHS: AF Corse have an unchanged line up from last year and the 458 has proved to be strong around Mount Panorama. Wyatt, Rugolo and Cioci have plenty of 458 experience behind them and will be a dark horse for a top five finish.

WEAKNESSES: Outright speed is a question mark here, although a year in Ferrari GT3 machinery should help Wyatt in particular since last year.

STRENGTHS: Swiss sportscar ace Harold Primat, who was part of Phoenix racing’s 2012 12 Hour squad is the team’s unseeded driver and is highly experienced. Thomas Jaeger and FIA GT star Maxmillian Buhk will be quick from the outset.

WEAKNESSES: HTP Motorsport have never competed in the Bathurst 12 Hour and may lack event experience. Otherwise a very strong entry.

WEAKNESSES: This squad has a habit of finding trouble at Bathurst. Needs to focus on the final hour, rather than the first one.

While Class A is most likely to produce the outright winner, a couple of contenders from Class B could spring a surprise.

There are a lot of strong line-ups here, but the overall package of car, team and driving talent ensures that the #1 Erebus Motorsport Mercedes is our pre-event favourite.

Strongest contenders are shaping as the #3 Phoenix Audi, #33 Clearwater Ferrari and #84 HTP Mercedes, with all three international squads clearly headed Down Under with expectations of knocking off the reigning winners.

The #25 United Autosports Audi, #32 Nismo Nissan, #63 Erebus Mercedes and #88 Maranello Ferrari lead the dark horse contenders, while others must overcome key weaknesses in order to mount the podium.

Cast your vote on who you think will win the Bathurst 12 Hour in the Pirtek Poll below.