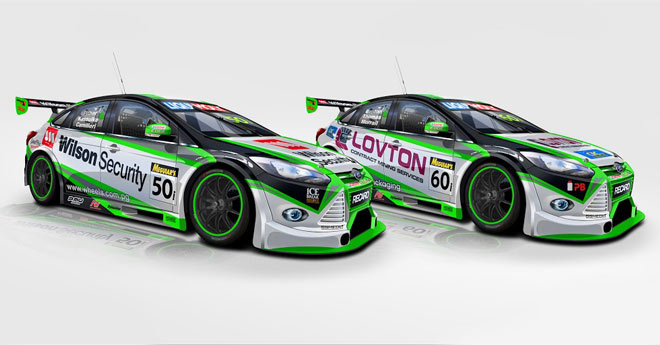 Two of the three MARC Focus V8s racing in Sunday’s Bathurst 12 Hour will compete in the familiar green, black and white colours of Wilson Security.

The #50 entry of Chris Pither, Keith Kassulke and Jake Camilleri carries major signage from the firm, while the #60 car of Michael Benton, Dylan Thomas and Hadrian Morall sports backing from mining firm Lovton.

Powered by Ford’s 5.0 litre Coyote V8, the purpose-built endurance racing cars have been among the biggest talking points ahead of the Bathurst race.

The Ryan McLeod-owned team completed two tests with its cars last week, taking to Queensland Raceway on Wednesday and Norwell on Sunday.

The cars are being stickered today ahead of the race, which will mark their first competitive outing before being shipped overseas to complete a full schedule of endurance events.

Although its commercial package and driver line-up are yet to be finalised, McLeod confirmed that his team will also run the third car it has entered.

Television personality Grant Denyer is expected to lead a crew of four drivers in the third entry.

“It’s a big achievement from our guys to have built the three cars and completed the testing that we have.

“From our running last week, we’re only a couple of seconds off the new Carrera Cup cars, so we shouldn’t be too far away from the Class B guys at Bathurst.”

Pither is the only one of the six confirmed drivers that has yet to sample the cars, with the pre-event testing having also involved former Australian Touring Car Champions Glenn Seton and Russell Ingall.

Forgie will not be present at Bathurst, however, due to his V8 SuperTourer commitments in New Zealand.