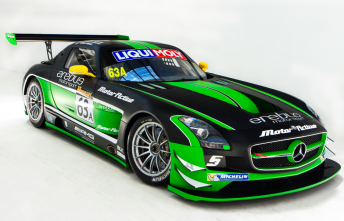 The countdown to Sunday’s Bathurst 12 Hour continues with the reveal of Erebus Motorsport’s new-look Mercedes contenders.

The team’s victory in last year’s race remains the highlight of the Betty Klimenko-owned team’s short existence in both GT and V8 Supercar racing.

Bernd Schneider is the only driver remaining in the squad from 2013, with the five-time DTM champion now joined by compatriots Maro Engel and Nico Bastian in the lead car.

The all-German crew will this year race in a purple and black livery, a variation of which was seen last year on the Australian driven car.

Local trio Will Davison, Jack Le Brocq and Greg Crick will compete in green; a choice said to be inspired by Australia’s green and gold international sporting colours. Although devoid of major commercial sponsors, signage includes that of MotorActive – the distributor of event sponsor Liqui-Moly – and Mercedes-Benz truck brand Actros.

Having starred in limited Australian GT outings with the team last year, the 2012 Australian Formula Ford Champion is hoping to graduate to V8 Supercars’ Dunlop Series this season following the Bathurst 12 Hour.

Teams, including Erebus’ 26-strong crew, will begin setting up at the Mount Panorama on Wednesday ahead of Friday’s opening practice session.

Stay tuned to Speedcafe.com later today for a full Bathurst 12 Hour preview, complete with Pirtek Poll giving you the chance to vote on who should start as the pre-event favourite.