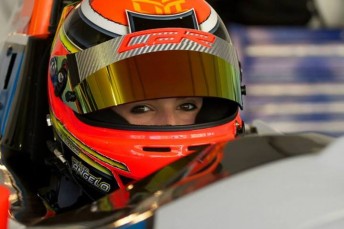 Chelsea Angelo will graduate to the Formula 3 Australian Drivers’ Championship this season.

The 17-year-old Victorian has agreed a deal to run an ex-Italian F3 Mygale M11 in the eight round series.

This will be the teenager’s first taste of ‘wings and slicks’ racing after a part-season in the Australian Formula Ford Championship last year.

Angelo had planned to enter the Dunlop Series with Evans this year before funding issues saw the car sold to Marcus Zukanovic last November.

“We’ve been working really hard since we tested an F3 last year to make this all happen and we’re rapt that it’s all come together,” said Angelo, having sampled a Team BRM Dallara at Mallala in December.

“We’ve had a lot of assistance from Mygale in securing a chassis and Ozstaff, who have supported me since my first race meeting in 2012, have committed to helping us again this year so it’s a very exciting time for all of us.”

While pleased to unveil a move to Australian F3, the late timing of the deal may hamper her plans to be on the grid at the opening round at Clipsal later this month.

“We’re hoping to be on the grid at Clipsal but the deal has only just come together so we’ll be pushing uphill to have the car in Australia, built up and ready to go in three weeks time,” added Angelo.

“If we do make it to Clipsal it doesn’t look like we will get any testing in beforehand so we will be going there primarily to learn about the car and collect some data for later in the year.

“But we’ll do all we can to be there as it’s one of the best meetings of the year and it’s got such a great atmosphere.”