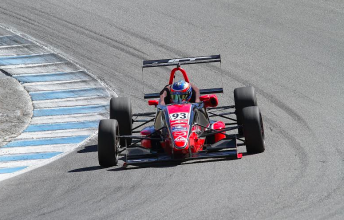 Victorian Scott Andrews will return to the United States for the two-round USF2000 Winterfest Series, starting next month.

Andrews will slot into the JDC Motorsport team after showing promise in two outings for the same outfit in the USF2000 Championship last year.

“It’s a great opportunity for me and fantastic that John has decided to take a punt on an overseas driver,” Andrews said.

“Last year, the cars were all new and I hadn’t been to the tracks before, but we still showed our speed.

“The hardest thing is that having not spent my youth there, I’m not even remotely familiar with most of the racetracks we compete at.

“In Australia, when you arrive at a new track you generally know most of the lines and what direction it goes given you’ve probably seen it on TV.”

Andrews made his debut in the wings and slicks class at Laguna Seca last September before running again at the Houston street race at Reliant Park a month later.

The 23-year-old has designs on progressing through the elaborate US open-wheel feeder system and graduating to IndyCar but is also mindful of opportunities in sports cars.

“I’d love to race IndyCar but there are opportunities in sportscar endurance racing as well, so I just have to keep working hard and doing the best I can.”

Next Story Mitch Evans close to a new GP2 deal

Previous Story Schumacher being brought out of coma