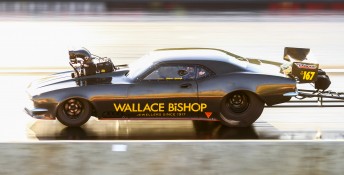 Stuart Bishop brought the Perth Motorplex congregation to its feet as he took out his first ever ANDRA Championship Top Doorslammer event.

Bishop’s win was against the odds – but extremely emotional for the Brisbane jeweller, with a number of his crew members affected by Cyclone Dane off the Queensland coast and a number of other personal issues that made the win even sweeter.

“This is my first win in 15-years of Drag Racing… its awesome,” said the Wallace Bishop Jewellers driver. “(Crew Chief) Daniel Reed has done a fabulous job the past couple of years… and this weekend we were down a couple of crew with that Cyclone back in Queensland, and we have had some personal setbacks with some of the crew having personal health challenges…and putting our heart and soul into this weekend is a tribute to them.

“I’m a jeweller by trade, but this  (the ANDRA Silver Christmas Tree) is the most expensive piece of metal I’ve ever held!”

He beat home another first time finalist in local driver, Pino Priolo – the former Sprintcar gun taking his Budget Forklifts Chev to the finals despite delays in receiving new parts from the USA.

Defending Champ, John Zappia experienced a shock first round exit, however even making the eight car field – the fastest in Doorslammer history – was an achievement in itself.

In a big night for the maroon state, John Cannuli took out the Top Alchohol victory over Craig Glassby.

Cannuli didn’t have an easy run to the final – coming up against leading lights Gary Phillips and Steven Ham and defeating them both. The double duty runner’s focus switched to Top Alcohol when he didn’t qualify for Top Doorslammer.

“That’s why we came here to get this funny car in the final and that’s what we did,” he said “It was consistent all weekend; it ran 5.60s and we brought the win home.”

“To beat those guys is really great; to beat the likes of Steve Ham and Gary Phillips is really good.”

The next round of the ANDRA Championships will be Top Fuel and Top Doorslammer at the Westernationals, February 28-March 2.