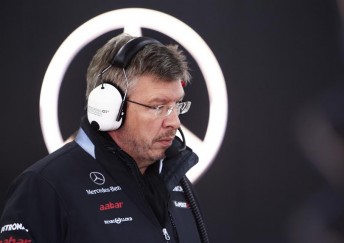 Ross Brawn has confirmed he has no intention of returning to Formula 1 following his exit from the Mercedes factory team.

The Englishman left Mercedes at the end of last season to make way for Toto Wolff and new recruit Paddy Lowe from McLaren as part of the team’s restructure.

Ever since his departure, Brawn has been linked to roles at Ferrari and most recently McLaren to replace team principal Martin Whitmarsh.

While at a fishing event in Scotland, the 59-year-old Brawn confirmed he has no intention of working in the sport in the future, quashing speculation surrounding a return.

“What they didn’t realise when I was invited here was they had a scoop because the world’s press was trying to find out if I was retiring or not,” Brawn was quoted as saying by the UK’s Daily Telegraph.

“This is the busiest time of the year for Formula 1 and I said I would come along and open the River Dee.

“If they had put two and two together they would have realised I was definitely retiring.

“I’m going to take a year to enjoy the fishing and then see what life brings.

“I’m looking forward to it but I’ve got no other plans.”

Brawn is one of the most successful engineers in Formula One history. His career began at Benetton in 1991 and it was here he won two world titles with Michael Schumacher in 1994 and 1995.

He followed Schumacher to Ferrari the following year and the combination went on to lift five world championships and dominate the sport in 2000’s.

Once Honda departed the sport, he took the ashes of the team to form Brawn GP in 2009. This resulted in driver Jenson Button winning the Drivers’ championship while the team claimed the Constructors’ crown.

Brawn GP evolved into the current Mercedes where Brawn remained as team principal until the end of last season.