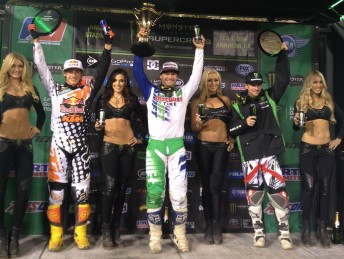 Aussie Chad Reed has soared to his second win of the season in the fifth round of the AMA Supercross at Anaheim’s Angel Stadium in California.

Reed shot into the lead on the opening lap, passing defending champion Ryan Villopoto and was never headed in the 20-lap main event.

It was Reed’s 43rd career victory and his eighth at the stadium, matching Jeremy McGrath, Ricky Carmichael and James Stewart.

The win has enabled Reed to edge closer to Ryan Villopoto in the 450SX class standings with the New South Welshman now sits just two points off the lead.

“It was a tough racetrack tonight,” said Reed.

“It was about making smart choices and putting yourself in a good position to ride 20 solid laps.

“This win means more to me than the last one [on January 18] where I came from behind, because it’s tougher to go out there and lead all 20 laps.

“We had our bike dialed in tonight and it was one of those nights where it felt at one with me. It was awesome through the whoops, we made a few tweaks and went with a different tyre for the main, one that I hadn’t raced before but it paid off.

“The fan support tonight was also incredible and it really means a lot,” Reed added.

The next round of the AMA Supercross is schedule for San Diego’s Qualcomm Stadium on February 8.