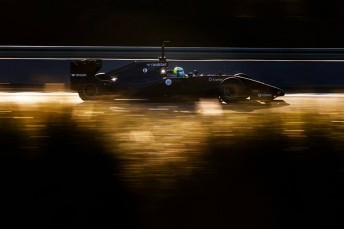 Felipe Massa gave Williams cause for optimism as he topped the times on the final day of the opening Formula 1 pre-season test at Jerez.

Mercedes powered cars along with Ferrari continued to impress at the former Grand Prix venue, while the Renault propelled machines of Red Bull, Toro Rosso and Caterham struggled for reliability and pace once again.

Massa managed to turn the fastest lap of the day on a track which was wet for the majority of the session.

His 1m28.299s effort was nearly a second quicker than Fernando Alonso’s Ferrari, while test driver Daniel Juncadella was third for Force India, just three tenths of a second back.

“Overall, I’m happy with my first days with Williams and I’m pleased with what I have seen in the team this week,” said Massa.

“For sure it is important to be competitive, but testing is testing, and we now need to look to prepare for Bahrain and then towards the first race, which is the most important thing.”

Mercedes appear to be the strongest team as the test closed with Nico Rosberg completing more than a race distance untroubled, which included 91 laps, before he handed the car over to Lewis Hamilton, who turned another 41 tours.

Hamilton was fifth fastest on the day while Rosberg was eighth as the team lead the overall test mileage rankings.

After Jenson Button’s promising pace earlier in the week, Kevin Magnussen further showed McLaren are in strong shape as he completed 110 laps and was fourth quickest.

However, an accident for the Dane late on in the session brought out the red flags and ultimately ended the test.

Red Bull once again grabbed headlines with another poor showing from their RB10.

Daniel Ricciardo managed to finish just seven laps as cooling issues plagued the car resulting in the squad packing up and heading home early. The Red Bull posted the slowest time of the day.

The world champions have clocked up only 21 laps in four days at Jerez which led to boss Christian Horner admitting that his team have plenty of work to do before the next test at Bahrain.

“We have had numerous Renault issues as well as chassis cooling issues, which have affected our progress. However, despite the lack of mileage, what we have managed to learn shows that the problems should be solvable for the next test in Bahrain.

“Part of the purpose of this early test was to learn about any issues ahead of the start of the season and there will now be a lot of focus on the dyno over the next few weeks.”

Formula One testing will continue with the second official test at Bahrain on February 19-22 where Lotus will join the fray with their new E22.