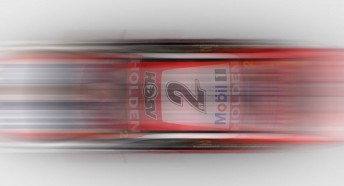 The HRT has released three teaser images of its 2014 livery

The Holden Racing Team is expected to reveal its 2014 livery at Mount Panorama, Bathurst, in the lead-up to Sydney Motorsport Park’s pre-season test.

Although remaining tight-lipped on its plans, it is understood that the team will extend its travel from Melbourne to the February 15 Sydney test in order to launch its campaign at the spectacular Mountain circuit.

The HRT’s revised colours have been teased by its sponsorship manager Simon McNamara on social media in recent weeks, with a return to fluorescent red hues, last seen in 2009, appearing to be on the cards. 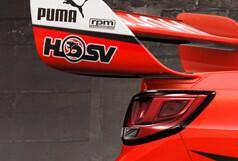 A fluorescent red will brighten the HRT’s look

The new livery will include prominent branding from SP Tools, which has taken over from six-year primary partner Toll.

The HRT has been one of the most talked about teams of the off-season following a recruitment drive that has included drafting in former Red Bull leader Adrian Burgess and Ford Performance Racing engineering manager Mat Nilsson.

The team retains an unchanged driver line-up, however, with James Courtney and Garth Tander both returning.

The other two entries prepared out of the Walkinshaw Racing stable, the Supercheap Auto Racing Holden of Tim Slade and James Rosenberg Racing Holden of Nick Percat, will be revealed separately to the HRT Commodores.

The HRT cars are set to break cover at Bathurst

The Slade and Percat cars are thought likely to run in testing liveries in Sydney ahead of pre-Adelaide livery launches.

The JRR entry has been added to the stable this season, returning Walkinshaw to a four-car outfit for the first time since 2010.