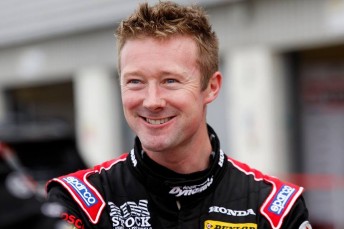 Former British Touring Car Champion Gordon Shedden will make his Mount Panorama debut after agreeing a deal to join the Motionsport team for the Bathurst 12 Hour.

The Scot is regarded as one of the best touring car racers in Europe with more than 200 BTCC starts, 34 race wins and the 2012 title amongst his list of achievements.

Shedden, who drives for the works Honda outfit in the BTCC, will team up with British team Motionsport to drive a Class C Lotus Exige at next weekend’s endurance race.

He will partner the team’s regular drivers Ben Gower and Pete Storey for the event, who will be contenders for overall class honours.

“I’m excited to be joining Motionsport for my first visit to Bathurst. It’s an iconic circuit, an iconic race and I think the Lotus Exige will be a strong contender for class honours” said Shedden.

Prior to his Bathurst trip, Shedden has been testing Honda’s new Civic estate which will contest the 2014 British Touring Car Championship.