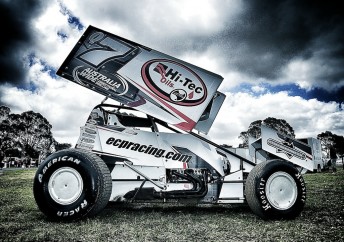 Robbie Farr will start as one of the favourites Pic: Wade Aunger

The Australian sprintcar title that begins tonight at Bendigo Bank Arena in Latrobe, Tasmania, remains a showdown between the nation’s best drivers despite the last minute withdrawal of defending champion James McFadden.

World Series Sprintcars leader McFadden withdrew from the trip to the Apple Isle with the Totally Workwear team citing a decision to focus on the chase for its third consecutive WSS crown.

Whilst McFadden and Lines are a body blow to the promotion, the big names of Australian Sprintcar racing will all be in Tasmania vying for the title.

Saturday night’s outcome could well represent a replay of the 2007 title, the last time it was held at Latrobe.

Brooke Tatnell defeated Max Dumesny and Robbie Farr – all three of whom have been in good form over the Sprintcar ‘month of money.’

His win at Latrobe in ‘07 was the third consecutive Championship that he had won – after taking the best part of 20 years to win his first.

Sadly, that event was the last time his legendary father, George, watched him race, prior to succumbing to a battle with cancer.

Dumesny enters the event having surged to second at the Classic last weekend, whilst Farr took the Eastcoast Pipelines #7 to victory against a crack field in the President’s Cup at Avalon – one of the traditional preludes to the Classic.

Farr and the ECP Racing team’s good form continued in Tasmania on Wednesday night, winning the prelude event at Latrobe.

For the first time in many years, Tasmanian fans feel as though they are in with a real shot at the Championship.

No Tasmanian has ever won the title, however with drivers like Shaun Dobson, Jamie Bricknell and Mark House emerging over recent seasons on the national scene, along with experienced campaigners the likes of Adrian and Jason Redpath and Robin Dawkins, it could be a good opportunity for any of those drivers to take the crown.

Another youngster, Victorian Jamie Veal – who stunned the crowd with his preliminary feature win and podium performance at The Classic – will be one to watch and could well ‘do a McFadden’ and show that the guard in Australian Sprintcar racing is well and truly changing.

Perennial front-runners, Trevor Green and Ian Madsen will make the trek to the Bendigo Bank Arena – both of whom are trying to etch their name on the Sprintcars Australia Honour Roll for the first time.

Meanwhile, Garry Brazier – who has son Jordyn racing alongside him – steps up another level at Australian Title time.

Brazier has six Titles to his credit, his last being a stunning win at the Perth Motorplex in 2009.

If he is to do that, taking a win in Tasmania would be one way to edge closer.

It will be the fourth time that Tasmania has hosted the Australian sprintcar title and the third time for the Bendigo Bank Arena.

Friday night will see qualifying heats and a preliminary A-Main, before further heats on Saturday night, the last chance qualifier Mains and the Championship race itself.