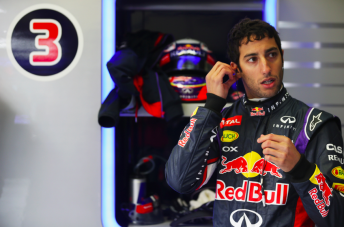 Daniel Ricciardo managed less than three laps of the Jerez circuit during his first day behind the wheel of Red Bull’s troublesome RB10.

The West Australian’s day began a full three hours after the scheduled start of testing, only to have the car grind to a halt merely metres from the pit exit.

The Red Bull had also been hit by a litany of electrical and overheating problems in the opening two days with Sebastian Vettel behind the wheel, ensuring the car has completed just 14 laps to date.

Ricciardo told reporters that chief designer Adrian Newey and team principal Christian Horner have headed back to the team’s factory in England as the team works on a solution.

“Adrian has gone back to the drawing board,” he said.

“There is only so much they can do here at the track. 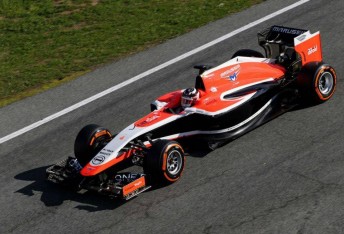 The Marussia completed installation laps without setting a time

“Adrian is pretty happy working in his office back at Milton Keynes and he’ll definitely be getting involved in trying to sort out the next step.”

The team’s problems are understood to have centered largely around Renault’s Energy Recovery System and its tight packaging within the Red Bull.

Meanwhile, McLaren’s new MP4-29 topped the time sheets for the second day in succession, this time with Kevin Magnussen behind the wheel.

The Dane managed 52 laps to be 0.4s faster than Felipe Massa’s Williams. Encouragingly for McLaren, team-mate Button chalked up 40 laps of his own during the morning to sit atop the times before handing the car over.

Sauber’s Adrian Sutil was seventh having seen his running end with a crash after 34 laps.

The third day saw the Marussia appear for the first time but, like the Red Bull and the Caterham, it did not set a time.

See below for the Day 3 test times