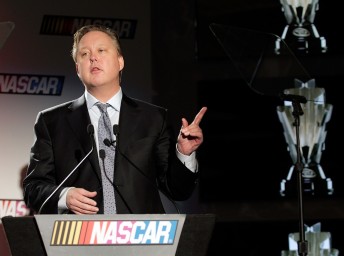 NASCAR has heavily modified the Chase for the Sprint Cup by introducing three knockout rounds and a sole deciding race for the four remaining contenders.

Among the sweeping changes for the final 10 races of the season, the number of drivers qualifying for the Chase will grow from 12 to 16.

In what is being called the Challenger Round, the 16 drivers will fight for the last 12 spots before moving into the Contender round.

“We have arrived at a format that makes every race matter even more, diminishes points racing, puts a premium on winning races and concludes with a best-of-the-best, first-to-the-finish line showdown race — all of which is exactly what fans want,” NASCAR chairman and CEO Brian France said.

“We have looked at a number of concepts for the last three years through fan research, models and simulations, and also maintained extensive dialogue with our drivers, teams and partners.

“The new Chase for the NASCAR Sprint Cup will be thrilling, easy to understand and help drive our sport’s competition to a whole new level.”

The 16 drivers who make it into the new Chase format must have at least one victory through the opening 26 races of the season and the drivers must be in the top 30 in points and also have attempted to qualify for each of the season’s previous points races.

In the case of more than 16 drivers winning at least one race the highest in the standings after the 26th race will move into the Chase.

The exemption is that should the points leader after 26 races be winless, he or she would be awarded the 16th and final Chase position.

The 16 drivers qualifying for the Chase will have their points reset to 2,000 points, and will be seeded based on bonus points (three per win) earned prior to the start of the Chase.

The nine races leading up to the season-ending event are divided into three individual rounds consisting of three races each.

Australia’s Marcos Ambrose, who is still searching to qualify for the Chase and is yet to breakthrough on an oval track, has a season highest place finish of 18th in 2009 and in 2012.

Any road course win for Ambrose is even more important under the new guidelines. There were a total of 16 drivers who won races in the 2013 season.

The Challenger Round: Consists of races at Chicagoland, New Hampshire and Dover. 12 of the 16 drivers will advance from this round.

A win in any of the three races automatically advances the driver to the next round, with remaining positions to be determined based on points earned during the round.

The 12 Chase drivers advancing will be seeded based on points earned through the three previous races and will have his or her points total reset to 3,000 points prior to the start of the next round.

The Contender Round: Consists of races at Kansas, Charlotte and Talladega. 8 of the 12 drivers will advance from this round.

As in the previous round, a win in any of the three Contender Round races automatically advances the driver to the next round, with remaining positions to be determined based on points earned during the round.

Points totals will be reset at 4,000 points for those advancing.

The Eliminator Round: Consists of races at Martinsville, Texas and Phoenix. Four of the eight drivers will advance from this round to earn a berth in the season-ending Sprint Cup Championship (final) round.

Eliminator Round winners automatically advance, with the remaining position or positions determined by points earned in the three races.

The four drivers that advance into the final round will have their points total reset to 5,000 following the Phoenix race.

Sprint Cup Championship: The highest finishing driver at Homestead among the four eligible drivers will win the Sprint Cup championship.

For those Chase drivers that fail to advance out of an individual round, their points total will be reset at 2,000 points at the conclusion of that particular segment.

They will continue to earn points based on finishes in the remaining races, with no further adjustments.

Thus, a driver that fails to advance out of the initial Challenger Round could earn enough points to finish as high as fifth in the final points standings. He or she would finish no worse than 16th based on the initial points reset.